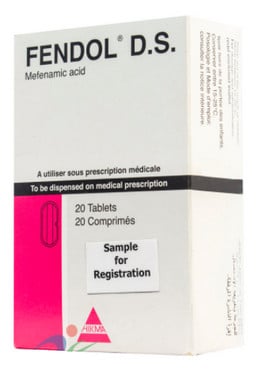 Mefenamic acid is a non-steroidal anti-inflammatory agent with analgesic properties, and a demonstrable antipyretic effect. It has been shown to inhibit prostaglandin activity.

1. As an anti-inflammatory analgesic for the symptomatic relief of rheumatoid arthritis ( including Still's Disease ), osteoarthritis, and pain including muscular, traumatic and dental pain, headaches of most aetiology, post-operative and post-partum pain; pyrexia in children.

3. Menorrhagia due to dysfunctional causes and presence of an IUD when other pelvic pathology has been ruled out.

In menorrhagia to be administered on the first day of excessive bleeding and continued according to the judgment of the physician.

In dysmenorrhoea to be administered at the onset of menstrual pain and continued according to the judgment of the physician.

Whilst no pharmacokinetic or clinical studies specific to the elderly have been undertaken with Fendol, it has been used at normal dosage in trials which included many elderly patients.

The elderly are at increased risk of the serious consequences of adverse reactions. If an NSAID is considered necessary, the lowest effective dose should be used and for the shortest possible duration. The patient should be monitored regularly for GI bleeding during NSAID therapy

Fendol should be used with caution in elderly patients suffering from dehydration and renal disease. Non-oliguric renal failure and proctocolitis have been reported mainly in elderly patients who have not discontinued mefenamic acid after the development of diarrhoea.

It is recommended that children under 12 years of age should be given Mefenamic Acid Suspension (50mg / 5ml).

Fendol Capsules should be taken preferably with or after food.

Do not exceed the stated dose.

Hypersensitivity to mefenamic acid or any of the other ingredients.

Because the potential exists for cross-sensitivity to aspirin, ibuprofen, or other non-steroidal anti-inflammatory drugs, mefenamic acid must not be given to patients who have previously shown hypersensitivity reaction (e.g. asthma, bronchospasm, rhinitis, angioedema or urticaria) to these medicines.

During the last trimester of pregnancy.

Patients on prolonged therapy should be kept under regular surveillance with particular attention to liver dysfunction, rash, blood dyscrasias or development of diarrhoea.).

Cardiovascular and cerebrovascular effects: Appropriate monitoring and advice are required for patients with a history of hypertension and/or mild to moderate congestive heart failure as fluid retention and oedema have been reported in association with NSAID therapy.

Clinical trial and epidemiological data suggest that use of some NSAIDs (particularly at high doses and in long term treatment) may be associated with a small increased risk of arterial thrombotic events (for example myocardial infarction or stroke).).

Patients with a history of GI toxicity, particularly when elderly, should report any unusual abdominal symptoms (especially GI bleeding) particularly in the initial stages of treatment.

Caution should be advised in patients receiving concomitant medications which could increase the risk of gastrotoxicity or bleeding such as corticosteroids, anticoagulants such as warfarin, selective serotonin reuptake inhibitors or anti-platelet agents such as aspirin

When GI bleeding or ulceration occurs in patients receiving mefenamic acid the treatment should be withdrawn.

Skin reactions: Serious skin reactions, some of them fatal, including exfoliative dermatitis, Stevens-Johnson syndrome, and toxic epidermal necrolysis, have been reported in association with use of NSAIDs. Patients appear to be at highest risk of these reactions early in the course of therapy, the onset of the reaction occurring in the majority of cases within the first month of treatment. Mefenamic acid should be stopped at the first appearance of skin rash, mucosal lesions or any other sign of hypersensitivity.

In dysmenorrhoea and menorrhagia lack of response should alert the physician to investigate other causes.

Epilepsy: Caution should be exercised when treating patients suffering from epilepsy.

In patients who are known or suspected to be poor CYP2C9 metabolisers based on previous history/experience with other CYP2C9 substrates, mefenamic acid should be administered with caution as they may have abnormally high plasma levels due to reduced metabolic clearance.

Undesirable effects such as dizziness, drowsiness, fatigue and visual disturbances are possible after taking NSAIDs. If affected, patients should not drive or operate machinery.

The most frequently reported side effects associated with mefenamic acid involve the gastrointestinal tract.

Diarrhoea occasionally occurs following the use of mefenamic acid. Although this may occur soon after starting treatment, it may also occur after several months of continuous use. The diarrhoea has been investigated in some patients who have continued this drug in spite of its continued presence. These patients were found to have associated proctocolitis. If diarrhoea does develop the drug should be withdrawn immediately and this patient should not receive mefenamic acid again.

Frequencies are not known for the following adverse reactions:

Blood and the lymphatic system disorders

*reversible when mefenamic acid is stopped

Oedema, hypertension and cardiac failure have been reported in association with NSAID treatment.

Clinical trial and epidemiological data suggest that use of some NSAIDs (particularly at high doses and in long term treatment) may be associated with an increased risk of arterial thrombotic events (for example myocardial infarction or stroke).

Elderly or debilitated patients seem to tolerate gastrointestinal ulceration or bleeding less well than other individuals and most spontaneous reports of fatal GI events are in this population.

It is important that the recommended dose is not exceeded and the regime adhered to since some reports have involved daily dosages under 3g.

Patients should be treated symptomatically as required

Good urine output should be ensured

Renal and liver function should be closely monitored.

Patients should be observed for at least four hours after ingestion of potentially toxic amounts.

Frequent or prolonged convulsions should be treated with intravenous diazepam.

Other measures may be indicated by the patient's clinical condition.

Haemodialysis is of little value since mefenamic acid and its metabolites are firmly bound to plasma proteins.

Prostaglandins are implicated in a number of disease processes including inflammation, modulation of the pain response, dysmenorrhoea, menorrhagia and pyrexia.

The anti-inflammatory activity of NSAIDs in the rat paw oedema test has been correlated with their ability to inhibit prostaglandin synthetase. When mefenamic acid is ranked in both these tests it falls between indomethacin and phenylbutazone and it is probable that inhibition of prostaglandin synthesis contributes to the pharmacological activity and clinical efficacy of mefenamic acid.

There is also considerable evidence that the fenamates inhibit the action of prostaglandins after they have been formed. They therefore both inhibit the synthesis and response to prostaglandins. This double blockade may well be important in their mode of action.

Mefenamic acid is absorbed from the gastro intestinal tract. Peak levels of 10 mg/l occur two hours after the administration of a 1g oral dose to adults.

Therefore in patients who are known or suspected to be poor CYP2C9 metabolisers based on previous history/experience with other CYP2C9 substrates, mefenamic acid should be administered with caution as they may have abnormally high plasma levels due to reduced metabolic clearance.

The plasma levels of unconjugated mefenamic acid decline with a half life of approximately two hours.

Preclinical safety data does not add anything of further significance to the prescriber.

Fendol price
We have no data on the cost of the drug.
However, we will provide data for each active ingredient