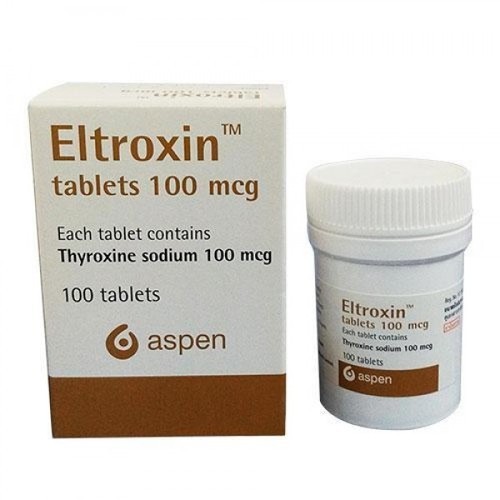 White, uncoated, biconvex tablets engraved on one face with â€œLTâ€ and 100 on the other.

In younger patients, and in the absence of heart disease, a serum Levothyroxine (T4) level of 70 to 160 nanomols per litre, or a serum thyrotrophin level of less that 5 milli-units per litre should be targeted. A pre-therapy ECG is valuable because ECG changes due to hypothyroidism may be confused with ECG evidence of cardiac ischaemia. If too rapid an increase in metabolism is produced (causing diarrhoea, nervousness, rapid pulse, insomnia, tremors, and sometimes anginal pain where there is latent cardiac ischaemia,) dosage must be reduced, or withheld, for a day or two, and then re-started at a lower dose level.

Adults: Initially 100 micrograms daily, preferably taken before breakfast or the first meal of the day. Adjust at three to four week intervals by 50 micrograms until normal metabolism is steadily maintained. The final daily dose may be up to 100 to 200 micrograms.

Elderly: As for patients aged over 50 years.

Patients over 50 years with cardiac disease:

For patients aged over 50 years, with or without cardiac disease, clinical response is probably a more acceptable criteria of dosage rather that serum levels.

The maintenance dose is generally 100 to 150 micrograms per m2 body surface area. The dose for children depends on their age, weight and the condition being treated. Regular monitoring using serum TSH levels, as in adults, is required to make sure he/she gets the right dose. Infants should be given the total daily dose at least half an hour before the first meal of the day.

For neonates and infants with congenital hypothyroidism, where rapid replacement is important, the initial recommended dosage is 10 to 15 micrograms per kg BW per day for the first 3 months. Thereafter, the dose should be adjusted individually according to the clinical findings and thyroid hormone and TSH values.

For children with acquired hypothyroidism, the initial recommended dosage is 12.5-50 micrograms per day. The dose should be increased gradually every 2 to 4 weeks according to the clinical findings and thyroid hormone and TSH values until the full replacement dose is reached.

The initial recommended dosage is 25 micrograms daily. In such conditions, the daily dose may be increased by 25 micrograms at intervals of every 2 - 4 weeks, until mild symptoms of hyperthyroidism is seen. The dose will then be reduced slightly.

In children under 5 years of age, the administration of whole tablets is not recommended. It is also not recommended that tablets are crushed and dispersed in water or other liquids, owing to limited solubility which could lead to dosing inaccuracy. In this age group it is preferable to administer an approved oral solution of levothyroxine.

Levothyroxine should be introduced very gradually in patients aged over 50 years and those with long standing hypothyroidism to avoid any sudden increase in metabolic demands.

Patients with panhypopituitarism or other causes predisposing to adrenal insufficiency may react to levothyroxine treatment, and it is advisable to start corticosteroid therapy before giving levothyroxine to such patients.

Levothyroxine sodium should be used with caution in patients with cardiovascular disorders, including angina, coronary artery disease, hypertension, and in the elderly who have a greater likelihood of occult cardiac disease.

To minimise the risk of adverse effects of undetected overtreatment, such as atrial fibrillation and fractures associated with low serum levels of thyroid stimulating hormone (TSH) in older patients, it is important to monitor serum TSH and adjust the dose accordingly during long term use

In individuals suspected to have cardiovascular disease or to be at high risk, it is important to perform an ECG prior to commencement of levothyroxine treatment in order to detect changes consistent with ischaemia in which case, levothyroxine should be initiated at a low dose, followed by cautious dose escalation to avoid worsening of ischaemia or precipitation of an infarct.

Thyroid replacement therapy may cause an increase in dosage requirements of insulin or other anti-diabetic therapy (such as metformin). Care is needed for patients with diabetes mellitus, and diabetes insipidus.

See note above regarding withdrawal of treatment.

Subclinical hyperthyroidism may be associated with bone loss. To minimise the risk of osteoporosis, dosage of levothyroxine sodium should be titrated to the lowest possible effective level.

Parents of children receiving thyroid agent should be advised that partial loss of hair may occur during the first few months of therapy, but this effect is usually transient and subsequent regrowth usually occurs.

Levothyroxine increases the effect of anticoagulants (Warfarin) and it may be necessary to reduce the anticoagulation dosage if excessive, hypoprothrombinaemia and bleeding are to be avoided.

Blood sugar levels are raised and dosage of anti-diabetic agents may require adjustment.

The effects of sympathomimetic agents (e.g. adrenaline or phenylephrine) are also enhanced

If levothyroxine therapy is initiated in digitalised patients, the dose of digitalis may require adjustment. Hyperthyroid patients may need their digoxin dosage gradually increased as treatment proceeds because initially patients are relatively sensitive to digoxin.

False low plasma concentrations have been observed with concurrent anti-inflammatory treatment such as phenylbutazone or acetylsalicylic acid and levothyroxine therapy.

Isolated reports of marked hypertension and tachycardia have been reported with concurrent ketamine administration.

Anti-convulsants, such as carbamazepine and phenytoin, enhance the metabolism of thyroid hormones and may displace them from plasma proteins.

Effects of Levothyroxine may be decreased by concomitant sertraline.

Beta blockers may decrease the peripheral conversion of levothyroxine to triiodothyronine.

Anti-obesity drugs such as orlistat may decrease levothyroxine absorption which may result in hypothyroidism (monitor for changes in thyroid function).

A number of drugs may affect thyroid function tests and this should be borne in mind when monitoring a patient on levothyroxine therapy.

Post-marketing cases have been reported indicating a potential interaction between ritonavir containing products and levothyroxine. Thyroid- stimulating hormone (TSH) should be monitored in patients treated with levothyroxine at least the first month after starting and /or ending ritonavir treatment.

The safety of Levothyroxine treatment during pregnancy is not known, but any possible risk of foetal abnormalities should be weighed against the risk to the foetus of untreated hypothyroidism.

Levothyroxine is excreted in breast milk in low concentrations, and it is contentious whether this can interfere with neonatal screening.

Side-effects are usually indicative of excessive dosage and usually disappear on reduction of dosage or withdrawal of treatment for a few days.

Adverse reactions listed below have been observed during clinical studies and/or during marketed use and are based on clinical trial data and classified according to MedDRA System Organ Class. Frequency categories are defined according to the following convention:

Not known (cannot be estimated from the available data)

1Some patients may experience a severe reaction to high levels of thyroid hormone. This is called a "thyroid crisis" with any of the following symptoms: Hyperpyrexia, tachycardia, arrhythmia, hypotension, cardiac failure, jaundice, confusion, seizure and coma

In most cases there will be no features. Signs of an overdose may include: fever, chest pain (angina), racing or irregular heartbeat, muscle cramps, headache, restlessness, flushing, sweating, diarrhoea, tremor, insomnia and hyperpyrexia. These signs can take up to 5 days to appear. Atrial fibrillation may develop. Convulsions occurred in one child. There may be increased toxicity in those with pre-existing heart disease.

Eltroxin is a tablet containing the hydrated form of Levothyroxine sodium which is used for the treatment of hypothyroidism. The Thyroid gland is dependant upon 2 active principles for it's main hormone activity. These are Levothyroxine (Tetraiodothyronine) and Tri-iodothyronine (see Goodman and Gilman, 1985). These closely related iodine containing amino acids are incorporated into the glycoprotein thyroglobulin. The chief action of these hormones is to increase the rate of cell metabolism. Levothyroxine is deiodinated in peripheral tissues to form Tri-iodothyronine which is thought to be active tissue form of thyroid hormone. Tri-iodothyronine is certainly more rapid acting and has shorter duration of action than Levothyroxine.

No further data of relevance.

Do not store above 25°C. Store in the original package in order to protect from light and moisture.