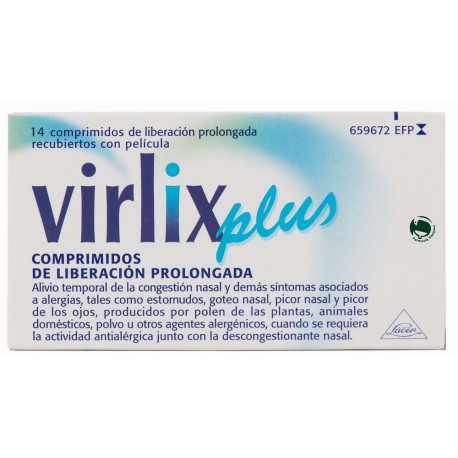 Virlix Plus (cetirizine, pseudoephedrine) Tablets are indicated for the relief of nasal and non-nasal symptoms associated with seasonal or perennial allergic rhinitis in adults and children 12 years of age and older.

The information provided in Dosage (Posology) and method of administration of Virlix Plus is based on data of another medicine with exactly the same composition as the Virlix Plus. . Be careful and be sure to specify the information on the section Dosage (Posology) and method of administration in the instructions to the drug Virlix Plus directly from the package or from the pharmacist at the pharmacy.
more...

Do not break or chew tablet; swallow tablet whole

Adults and Children 12 Years and over:
take 1 tablet every 12 hours; do not take more than 2 tablets in 24 hours

Adults 65 years and over:
Ask a doctor

Children under 12 years of age:
Ask a doctor

Consumers with liver or kidney disease:
Ask a doctor

Virlix Plus (cetirizine, pseudoephedrine) Tablets may be given with or without food.

Virlix Plus (cetirizine, pseudoephedrine) Tablets are contraindicated in patients with a known hypersensitivity to any of its ingredients or to hydroxyzine.

Due to its pseudoephedrine component, Virlix Plus (cetirizine, pseudoephedrine) Tablets are contraindicated in patients with narrow-angle glaucoma or urinary retention, and in patients receiving monoamine oxidase (MAO) inhibitor therapy or within fourteen (14) days of stopping such treatment (see PRECAUTIONS, Drug Interactions section). It is also contraindicated in patients with severe hypertension, or severe coronary artery disease, and in those who have shown hypersensitivity or idiosyncrasy to its components, to adrenergic agents, or to other drugs of similar chemical structures. Manifestations of patient idiosyncrasy to adrenergic agents include insomnia, dizziness, weakness, tremor, or arrhythmias.

The information provided in Special warnings and precautions for use of Virlix Plus is based on data of another medicine with exactly the same composition as the Virlix Plus. . Be careful and be sure to specify the information on the section Special warnings and precautions for use in the instructions to the drug Virlix Plus directly from the package or from the pharmacist at the pharmacy.
more...

Due to its pseudoephedrine component, Virlix Plus (cetirizine, pseudoephedrine) Tablets should be used with caution in patients with hypertension, diabetes mellitus, ischemic heart disease, increased intraocular pressure, hyperthyroidism, renal impairment, or prostatic hypertrophy (see WARNINGS and CONTRAINDICATIONS). Patients with decreased renal function should be given a lower initial dose (one tablet per day) because they have reduced elimination of cetirizine and pseudoephedrine (see CLINICAL PHARMACOLOGY and DOSAGE AND ADMINISTRATION).

Carcinogenesis, Mutagenesis and Impairment of Fertility

There are no carcinogenicity trials of pseudoephedrine and cetirizine in combination.

Pseudoephedrine: Two-year studies in rats and mice conducted under the auspices of the National Toxicology Program (NTP) demonstrated no evidence of carcinogenic potential with ephedrine sulfate, a structurally related drug with pharmacological properties similar to pseudoephedrine, at dietary doses up to 10 and 27 mg/kg, respectively (approximately 1/3 and 1/2, respectively, the maximum recommended daily dose of pseudoephedrine in adults on a mg/m2 basis).

In a reproductive toxicity study in rats, combination oral doses of cetirizine and pseudoephedrine up to 6/154 mg/kg (approximately 5 times the maximum recommended daily dose in adults on a mg/m2 basis) had no effect on fertility.

Clinical trials of Virlix Plus (cetirizine, pseudoephedrine) Tablets did not include sufficient numbers of patients aged 65 and over to determine whether they respond differently from younger subjects. Other reported clinical experience has not identified differences in responses between the elderly and younger patients, although the elderly are more likely to have adverse reactions to sympathomimetic amines. In general, dosing in an elderly patient should be cautious, reflecting the greater frequency of decreased hepatic, renal, or cardiac function, and of concomitant disease or other drug therapy.

The cetirizine and pseudoephedrine components of Virlix Plus (cetirizine, pseudoephedrine) Tablets are known to be substantially excreted by the kidney, and the risk of toxic reactions to this drug may be greater in patients with impaired renal function. Because elderly patients are more likely to have decreased renal function, care should be taken in dose selection, and it may be useful to monitor renal function (see CLINICAL PHARMACOLOGY).

Cetirizine: Of the total number of subjects in clinical trials of cetirizine alone, 186 were 65 years and over, while 39 were 75 years and over. No overall differences in safety were observed between these subjects and younger subjects, and other reported experience has not identified differences in responses between the elderly and younger patients, but greater sensitivity of some older individuals cannot be ruled out. With regard to efficacy, clinical trials of cetirizine for each approved indication did not include sufficient numbers of subjects aged 65 years and over to determine whether they respond differently than younger patients.

Controlled and uncontrolled clinical trials of cetirizine conducted in the United States and Canada included more than 6000 patients aged 12 years and older, with more than 3900 receiving cetirizine at doses of 5 to 20 mg per day. The duration of treatment ranged from 1 week to 6 months, with a mean exposure of 30 days.

Most adverse reactions reported during therapy with cetirizine were mild or moderate. In placebo-controlled trials, the incidence of discontinuations due to adverse reactions in patients receiving cetirizine 5 mg or 10 mg was not significantly different from placebo (2.9% vs. 2.4%, respectively).

Table 2 lists adverse experiences in patients aged 12 years and older that were reported for cetirizine 5 and 10 mg in controlled clinical trials in the United States and were more common with cetirizine than placebo.

In addition, headache and nausea occurred in more than 2% of the patients, but were more common in placebo patients.

The following events were observed infrequently (less than 2%), in 3982 adults and children 12 years and older or in 659 pediatric (6 to 11 years) patients who received cetirizine in U.S. trials, including an open study of six months duration. A causal relationship of these infrequent events with cetirizine administration has not been established.

Pseudoephedrine hydrochloride may cause mild CNS stimulation in hypersensitive patients.

Information regarding acute overdosage is limited to experience with cetirizine alone and the marketing history of pseudoephedrine hydrochloride.

Overdosage has been reported with cetirizine. In one adult patient who took 150 mg of cetirizine, the patient was somnolent but did not display any other clinical signs or abnormal blood chemistry or hematology results. In an 18-month-old pediatric patient who took an overdose of cetirizine (approximately 180 mg), restlessness and irritability were observed initially; this was followed by drowsiness. Should overdose occur, treatment should be symptomatic or supportive, taking into account any concomitantly ingested medications. There is no known specific antidote to cetirizine. Cetirizine is not effectively removed by dialysis, and dialysis will be ineffective unless a dialyzable agent has been concomitantly ingested. The acute minimal lethal oral doses in mice and rats were 237 and 562 mg/kg, respectively (approximately 95 and 460 times the maximum recommended daily dose in adults on a mg/m2 basis). In rodents, the target of acute toxicity was the central nervous system, and the target of multiple-dose toxicity was the liver.