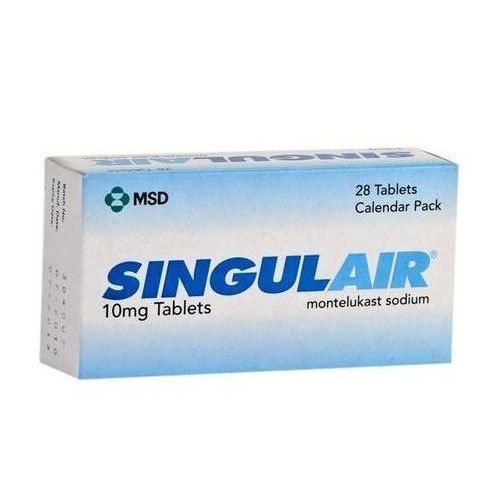 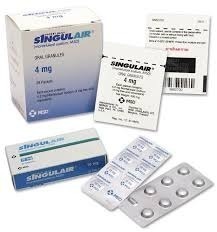 One film-coated tablet contains montelukast sodium, which is equivalent to 10 mg montelukast.

Beige, rounded square, film-coated, size 7.9 mm x 7.9 mm with SINGULAIR engraved on one side and MSD 117 on the other.

Singulair is indicated in the treatment of asthma as add-on therapy in those patients with mild to moderate persistent asthma who are inadequately controlled on inhaled corticosteroids and in whom â€œas-neededâ€ short acting Î²-agonists provide inadequate clinical control of asthma. In those asthmatic patients in whom Singulair is indicated in asthma, Singulair can also provide symptomatic relief of seasonal allergic rhinitis.

Singulair is also indicated in the prophylaxis of asthma in which the predominant component is exercise-induced bronchoconstriction.

The recommended dose for adults and adolescents 15 years of age and older with asthma, or with asthma and concomitant seasonal allergic rhinitis, is one 10 mg tablet daily to be taken in the evening.

The therapeutic effect of Singulair on parameters of asthma control occurs within one day. Singulair may be taken with or without food. Patients should be advised to continue taking Singulair even if their asthma is under control, as well as during periods of worsening asthma. Singulair should not be used concomitantly with other products containing the same active ingredient, montelukast.

Therapy with Singulair in relation to other treatments for asthma

Singulair can be added to a patient's existing treatment regimen.

5 mg chewable tablets are available for paediatric patients 6 to 14 years of age.

4 mg chewable tablets are available for paediatric patients 2 to 5 years of age.

4 mg granules are available for paediatric patients 6 months to 5 years of age.

Patients should be advised never to use oral montelukast to treat acute asthma attacks and to keep their usual appropriate rescue medication for this purpose readily available. If an acute attack occurs, a short-acting inhaled Î²-agonist should be used. Patients should seek their doctors' advice as soon as possible if they need more inhalations of short-acting Î²-agonists than usual.

Montelukast should not be substituted abruptly for inhaled or oral corticosteroids.

There are no data demonstrating that oral corticosteroids can be reduced when montelukast is given concomitantly.

In rare cases, patients on therapy with anti-asthma agents including montelukast may present with systemic eosinophilia, sometimes presenting with clinical features of vasculitis consistent with Churg-Strauss syndrome, a condition which is often treated with systemic corticosteroid therapy. These cases have been sometimes associated with the reduction or withdrawal of oral corticosteroid therapy. Although a causal relationship with leukotriene receptor antagonism has not been established, physicians should be alert to eosinophilia, vasculitic rash, worsening pulmonary symptoms, cardiac complications, and/or neuropathy presenting in their patients. Patients who develop these symptoms should be reassessed and their treatment regimens evaluated.

Treatment with montelukast does not alter the need for patients with aspirin-sensitive asthma to avoid taking aspirin and other non-steroidal anti-inflammatory drugs.

Montelukast may be administered with other therapies routinely used in the prophylaxis and chronic treatment of asthma. In drug-interactions studies, the recommended clinical dose of montelukast did not have clinically important effects on the pharmacokinetics of the following medicinal products: theophylline, prednisone, prednisolone, oral contraceptives (ethinyl estradiol/norethindrone 35/1), terfenadine, digoxin and warfarin.

In vitro studies have shown that montelukast is a substrate of CYP 2C8, and to a less significant extent, of 2C9, and 3A4. In a clinical drug-drug interaction study involving montelukast and gemfibrozil (an inhibitor of both CYP 2C8 and 2C9) gemfibrozil increased the systemic exposure of montelukast by 4.4-fold. No routine dosage adjustment of montelukast is required upon co-administration with gemfibrozil or other potent inhibitors of CYP 2C8, but the physician should be aware of the potential for an increase in adverse reactions.

Based on in vitro data, clinically important drug interactions with less potent inhibitors of CYP 2C8 (e.g., trimethoprim) are not anticipated. Co-administration of montelukast with itraconazole, a strong inhibitor of CYP 3A4, resulted in no significant increase in the systemic exposure of montelukast.

Animal studies do not indicate harmful effects with respect to effects on pregnancy or embryonal/foetal development.

Limited data from available pregnancy databases do not suggest a causal relationship between Singulair and malformations (i.e. limb defects) that have been rarely reported in worldwide post-marketing experience.

Singulair may be used during pregnancy only if it is considered to be clearly essential.

Singulair may be used in breast-feeding only if it is considered to be clearly essential.

Singulair has no or negligible influence on the ability to drive and use machines. However, individuals have reported drowsiness or dizziness.

Montelukast has been evaluated in clinical studies as follows:

With prolonged treatment in clinical trials with a limited number of patients for up to 2 years for adults, and up to 12 months for paediatric patients 6 to 14 years of age, the safety profile did not change.

Adverse reactions reported in post-marketing use are listed, by System Organ Class and specific Adverse Reactions, in the table below. Frequency Categories were estimated based on relevant clinical trials.

In chronic asthma studies, montelukast has been administered at doses up to 200 mg/day to adult patients for 22 weeks and in short term studies, up to 900 mg/day to patients for approximately one week without clinically important adverse experiences.

There have been reports of acute overdose in post-marketing experience and clinical studies with montelukast. These include reports in adults and children with a dose as high as 1,000 mg (approximately 61 mg/kg in a 42 month old child). The clinical and laboratory findings observed were consistent with the safety profile in adults and paediatric patients. There were no adverse experiences in the majority of overdose reports.

The most frequently occurring adverse experiences were consistent with the safety profile of montelukast and included abdominal pain, somnolence, thirst, headache, vomiting, and psychomotor hyperactivity.

No specific information is available on the treatment of overdose with montelukast. It is not known whether montelukast is dialysable by peritoneal- or haemodialysis.

The cysteinyl leukotrienes (LTC4, LTD4, LTE4) are potent inflammatory eicosanoids released from various cells including mast cells and eosinophils. These important pro-asthmatic mediators bind to cysteinyl leukotriene (CysLT) receptors. The CysLT type-1 (CysLT1) receptor is found in the human airway (including airway smooth muscle cells and airway macrophages) and on other pro-inflammatory cells (including eosinophils and certain myeloid stem cells). CysLTs have been correlated with the pathophysiology of asthma and allergic rhinitis. In asthma, leukotriene-mediated effects include bronchoconstriction, mucous secretion, vascular permeability, and eosinophil recruitment. In allergic rhinitis, CysLTs are released from the nasal mucosa after allergen exposure during both early- and late-phase reactions and are associated with symptoms of allergic rhinitis. Intranasal challenge with CysLTs has been shown to increase nasal airway resistance and symptoms of nasal obstruction.

Montelukast is an orally active compound which binds with high affinity and selectivity to the CysLT1 receptor. In clinical studies, montelukast inhibits bronchoconstriction due to inhaled LTD4 at doses as low as 5 mg. Bronchodilation was observed within 2 hours of oral administration. The bronchodilation effect caused by a Î²-agonist was additive to that caused by montelukast. Treatment with montelukast inhibited both early- and late-phase bronchoconstriction due to antigen challenge. Montelukast, compared with placebo, decreased peripheral blood eosinophils in adult and paediatric patients. In a separate study, treatment with montelukast significantly decreased eosinophils in the airways (as measured in sputum) and in peripheral blood while improving clinical asthma control.

A clinical study was conducted to evaluate montelukast for the symptomatic treatment of seasonal allergic rhinitis in adult and adolescent asthmatic patients 15 years of age and older with concomitant seasonal allergic rhinitis. In this study, montelukast 10 mg tablets administered once daily demonstrated a statistically significant improvement in the Daily Rhinitis Symptoms score, compared with placebo. The Daily Rhinitis Symptoms score is the average of the Daytime Nasal Symptoms score (mean of nasal congestion, rhinorrhea, sneezing, nasal itching) and the Nighttime Symptoms score (mean of nasal congestion upon awakening, difficulty going to sleep, and nighttime awakenings scores). Global evaluations of allergic rhinitis by patients and physicians were significantly improved, compared with placebo. The evaluation of asthma efficacy was not a primary objective in this study.

In aspirin-sensitive asthmatic patients receiving concomitant inhaled and/or oral corticosteroids, treatment with montelukast, compared with placebo, resulted in significant improvement in asthma control (FEV1 8.55% vs -1.74% change from baseline and decrease in total Î²-agonist use -27.78% vs 2.09% change from baseline).

Montelukast is rapidly absorbed following oral administration. For the 10 mg film-coated tablet, the mean peak plasma concentration (Cmax) is achieved 3 hours (Tmax) after administration in adults in the fasted state. The mean oral bioavailability is 64%. The oral bioavailability and Cmax are not influenced by a standard meal. Safety and efficacy were demonstrated in clinical trials where the 10 mg film-coated tablet was administered without regard to the timing of food ingestion.

For the 5 mg chewable tablet, the Cmax is achieved in 2 hours after administration in adults in the fasted state. The mean oral bioavailability is 73% and is decreased to 63% by a standard meal.

Montelukast is extensively metabolised. In studies with therapeutic doses, plasma concentrations of metabolites of montelukast are undetectable at steady state in adults and children.

Cytochrome P450 2C8 is the major enzyme in the metabolism of montelukast. Additionally CYP 3A4 and 2C9 may have a minor contribution, although itraconazole, an inhibitor of CYP 3A4, was shown not to change pharmacokinetic variables of montelukast in healthy subjects that received 10 mg montelukast daily. Based on in vitro results in human liver microsomes, therapeutic plasma concentrations of montelukast do not inhibit cytochromes P450 3A4, 2C9, 1A2, 2A6, 2C19, or 2D6. The contribution of metabolites to the therapeutic effect of montelukast is minimal.

With high doses of montelukast (20- and 60-fold the recommended adult dose), decrease in plasma theophylline concentration was observed. This effect was not seen at the recommended dose of 10 mg once daily.

No deaths occurred following a single oral administration of montelukast sodium at doses up to 5,000 mg/kg in mice and rats (15,000 mg/m2 and 30,000 mg/m2 in mice and rats, respectively), the maximum dose tested. This dose is equivalent to 25,000 times the recommended daily adult human dose (based on an adult patient weight of 50 kg).

Montelukast was determined not to be phototoxic in mice for UVA, UVB or visible light spectra at doses up to 500 mg/kg/day (approximately >200-fold based on systemic exposure).

Montelukast was neither mutagenic in in vitro and in vivo tests nor tumorigenic in rodent species.

Store in the original package in order to protect from light and moisture.

Packaged in polyamide/PVC/aluminium blister package in: