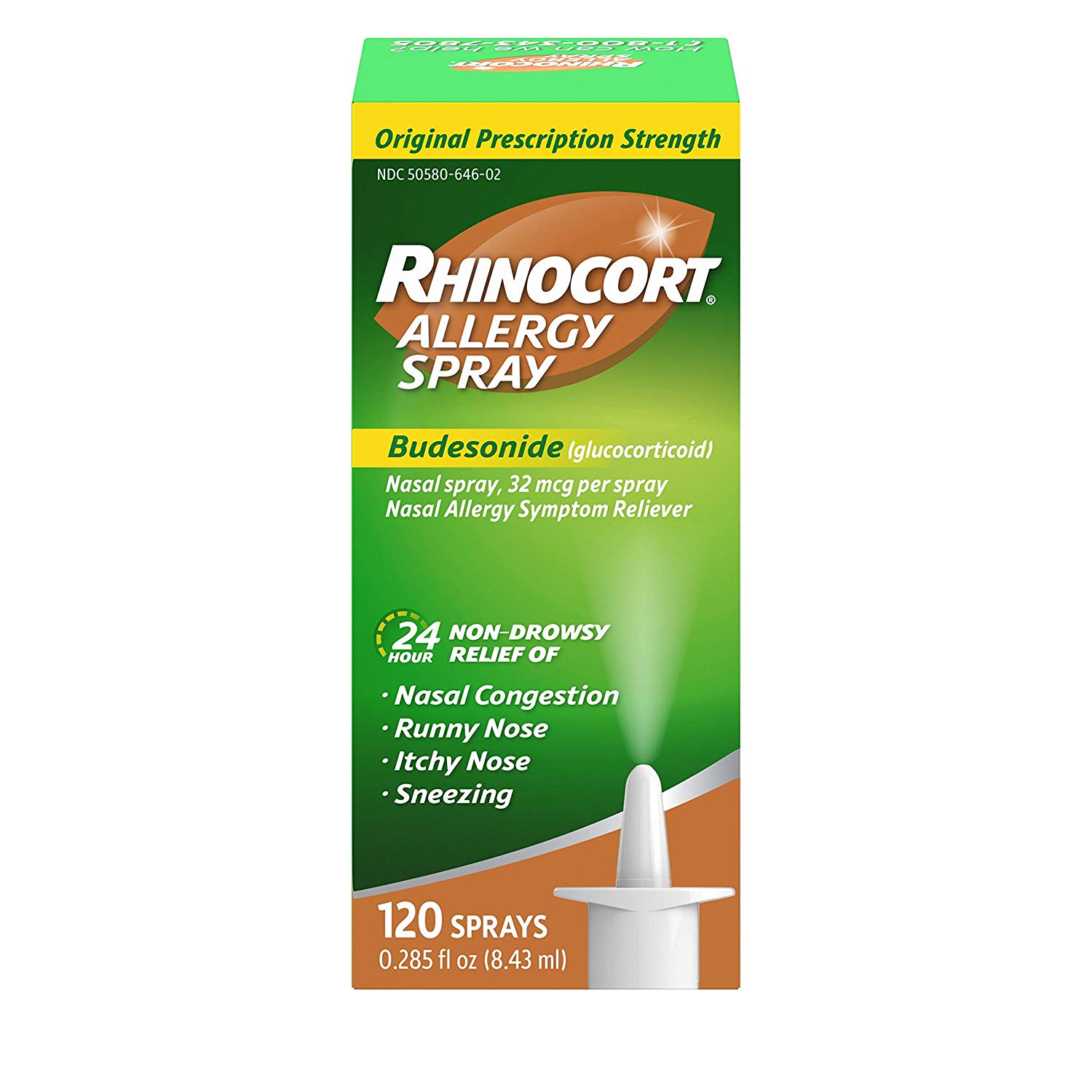 Dosage should be individualised.

Rhinitis (Adults including the elderly)

Nasal Polyps (Adults including the elderly)

The patient should be informed that the full effect of Rhinocort is not achieved until after a few days treatment. Treatment of seasonal rhinitis should, if possible, start before exposure to allergens. Treatment can be continued for up to 3 months.

Patients should be reminded of the importance of taking this medicine regularly.

The dose should be titrated to the lowest dose at which effective control of symptoms is achieved.

Paediatric population: There are insufficient data to recommend the use of Rhinocort Aqua in children. However, it is unlikely that the risk/benefit ratio in children is different from that in adults.

Special care is demanded in treatment of patients transferred from oral steroids to Rhinocort where disturbances of the hypothalamic-pituitary-adrenal (HPA) axis could be expected.

Concomitant treatment of seasonal rhinitis may sometimes be necessary to counteract eye symptoms caused by the allergy. In continuous long-term treatment, the nasal mucosa should be inspected regularly e.g. every 6 months.

Systemic effects of nasal corticosteroids may occur, particularly at high doses prescribed for prolonged periods. These effects are much less likely to occur than with oral corticosteroids and may vary in individual patients and between different corticosteroid preparations. Potential systemic effects may include Cushing's syndrome, Cushingoid features, adrenal suppression, growth retardation in children and adolescents, cataract, glaucoma and more rarely, a range of psychological or behavioural effects including psychomotor hyperactivity, sleep disorders, anxiety, depression or aggression (particularly in children).

Visual disturbance may be reported with systemic and topical corticosteroid use. If a patient presents with symptoms such as blurred vision or other visual disturbances, the patient should be considered for referral to an ophthalmologist for evaluation of possible causes which may include cataract, glaucoma or rare diseases such as central serous chorioretinopathy (CSCR) which have been reported after use of systemic and topical corticosteroids.

The long-term effects of nasal glucocorticosteroids in children are not fully known. Physicians should closely follow the growth of children taking glucocorticosteroids for longer term by any route, and weigh the benefits of the glucocorticosteroid therapy against the possibility of growth suppression. If growth is slowed, therapy should be reviewed with the aim of reducing the dose of nasal corticosteroid, if possible, to the lowest dose at which effective control of symptoms is maintained. In addition, consideration should also be given to referring the patient to a paediatric specialist.

Co-treatment with CYP3A inhibitors, e.g. itraconazole, ketoconazole, HIV protease inhibitors and cobicistat-containing products is expected to increase the risk of systemic corticosteroid side effects. Therefore, the combination should be avoided unless the benefit outweighs this increased risk, in which case patients should be monitored for systemic corticosteroid side effects. This is of limited clinical importance for short-term (1-2 weeks) treatment with itraconazole or ketoconazole or other potent CYP3A inhibitors, but should be taken into consideration during long-term treatment. A reduction in the dose of budesonide should also be considered.

Rhinocort has not been observed to interact with any drug used for the treatment of rhinitis.

The metabolism of budesonide is primarily mediated by CYP3A enzymes. Co-treatment with CYP3A inhibitors, e.g. itraconazole, ketoconazole, HIV protease inhibitors and cobicistat-containing products, are expected to increase the risk of systemic side effects. The combination of Rhinocort with potent CYP3A inhibitors should be avoided unless the benefit outweighs the increased risk of systemic corticosteroid side effects, in which case patients should be monitored for systemic corticosteroid side effects. If Rhinocort is co-administered with anti-fungals (such as itraconazole and ketoconazole), the period between treatments should be as long as possible. A reduction of the budesonide dose could be considered.

Raised plasma concentrations of and enhanced effects of corticosteroids have been observed in women also treated with oestrogens and contraceptive steroids, but no effect has been observed with Rhinocort and concomitant intake of low dose combination oral contraceptives.

Because adrenal function may be suppressed, an ACTH stimulation test for diagnosing pituitary insufficiency might show false results (low values).

Results from prospective epidemiological studies and from worldwide post marketing experience indicate no increased risk for overall congenital malformations from the use of inhaled or intranasal budesonide during early pregnancy. As with other drugs the administration of Rhinocort during pregnancy requires that the benefits for the mother are weighed against the risk for the foetus.

Budesonide is excreted in breast milk. However, at therapeutic doses of Rhinocort no effects on the breast fed child are anticipated. Rhinocort can be used during breast feeding.

In a pharmacokinetic study, the estimated daily infant dose was 0.3% of the daily maternal dose for both dose levels, and the average plasma concentration in infants was estimated to be 1/600th of the concentrations observed in maternal plasma, assuming complete infant oral bioavailability. Budesonide concentrations in infant plasma samples were all less than the limit of quantification.

Based on data from inhaled budesonide and the fact budesonide exhibits linear PK properties within the therapeutic dosage intervals after nasal, inhaled, oral and rectal administrations at therapeutic doses of budesonide, exposure to the breast-fed child is anticipated to be low.

Rhinocort Aqua has no or negligible influence on the ability to drive and use machines.

* based on mechanistic plausibility and extrapolation from other budesonide/corticosteroid formulations.

Growth retardation has been reported in children receiving intranasal steroids.

Acute overdose with Rhinocort even in excessive doses, is not expected to be a clinical problem.

Inhalation of high doses of corticosteroids may lead to suppression of the hypothalamic-pituitary-adrenal (HPA) axis function.

Budesonide is a non-halogenated glucocorticosteroid with a high local anti-inflammatory action within the respiratory tract.

Bioavailablity of oral budesonide in man is low (11-13%) due to an extensive first-pass metabolism in the liver.

Decongestants and other nasal preparations for topical use, corticosteroids. ATC code: R01A D05

The acute toxicity of budesonide is low and of the same order of magnitude and type as that of the reference glucocorticoids studied (beclomethasone dipropionate, flucinolone acetonide). Results from subacute and chronic toxicity studies show that the systemic effects of budesonide are less severe than or similar to those observed after administration of the other glucocorticosteroids e.g. decreased body weight gain and atrophy of lymphoid tissues and adrenal cortex. An increased incidence of brain gliomas in male rats in a carcinogenicity study could not be verified in a repeat study, in which the incidence of gliomas did not differ between any of the groups on active treatment (budesonide, prednisolone, triamcinolone acetonide) and the control groups. Liver changes (primary hepatocellular neoplasms) found in male rats in the original carcinogenicity study were noted again in the repeat study with budesonide, as well as with the reference glucocorticosteroids. These effects are most probably related to a receptor effect and thus represent a class effect.

Available clinical experience shows no indication that budesonide or other glucocorticosteroids induce brain gliomas or primary heptocellular neoplasms in man. Budesonide has been used successfully in the treatment of seasonal allergic rhinitis for several years.

In animal reproduction studies, corticosteroids such as budesonide have been shown to induce malformations (cleft palate, skeletal malformations). However these animal experimental results do not appear to be relevant in humans at the recommended doses.

Use within 2 months of starting treatment.

Do not store above 30°C. Do not refrigerate or freeze.

Rhinocort Aqua is an aqueous solution of budesonide in either a 10 ml or 20 ml amber/brown glass (type II) bottle. Each bottle is fitted with a spray pump and contains either 120 or 240 actuations. Not all pack sizes may be marketed.

Before using Rhinocort Aqua for the first time the nozzle must be primed (filled with the medicine). To do this the bottle is shaken and the protective cap removed. The bottle is then held upright and the nozzle pumped up and down several times (5-10 times) spraying into the air, until an even mist is seen. The priming effect remains for approximately 24 hours. If a longer period of time passes before the next dose is taken, the nozzle must be loaded with medicine again. This time it is sufficient to spray just once into the air.

a. The patient is then instructed to blow their nose. Next, the bottle needs to be shaken and the protective cap removed.

b. The bottle is then held upright, with one finger held on either side of the nozzle.

c. The tip of the nozzle is inserted into the nostril and the nozzle pressed down once (or more as instructed by the doctor). The spray is then administered into the other nostril in the same way. Note: it is not necessary to inhale at the same time as spraying.

d. The nozzle needs to be wiped with a clean tissue after use and the protective cap replaced. The bottle should be stored in an upright position.

The plastic nozzle is removed with a clean tissue and washed in warm, not hot, water. The nozzle is then rinsed thoroughly, dried and then replaced onto the top of the bottle. The nozzle should not be unblocked with a pin or other sharp object. After cleaning, the nozzle must be primed (filled with medicine) again before use.