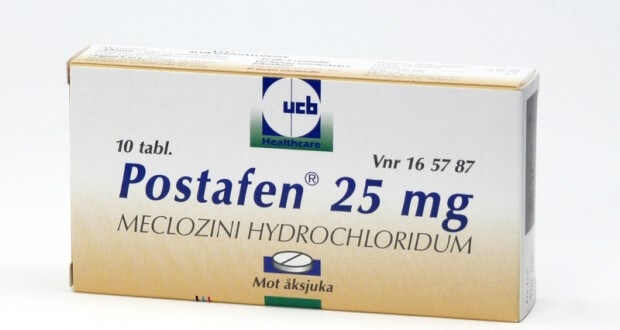 Based on a review of this drug by the National Academy of Sciences - National Research Council and/or other information, FDA has classified the indications as follows:

Effective: Management of nausea and vomiting, and dizziness associated with motion sickness.

For the control of vertigo associated with diseases affecting the vestibular system, the recommended dose is 25 to 100 mg daily, in divided dosage, depending upon clinical response.

The initial dose of 25 to 50 mg of Postafen (Meclozine) should be taken one hour prior to embarkation for protection against motion sickness. Thereafter, the dose may be repeated every 24 hours for the duration of the journey.

Meclizine HCl is contraindicated in individuals who have shown a previous hypersensitivity to it.

Since drowsiness may, on occasion, occur with use of this drug, patients should be warned of this possibility and cautioned against driving a car or operating dangerous machinery.

Patients should avoid alcoholic beverages while taking this drug.

Due to its potential anticholinergic action, this drug should be used with caution in patients with asthma, glaucoma, or enlargement of the prostate gland.

Clinical studies establishing safety and effectiveness in children have not been done; therefore, usage is not recommended in children under 12 years of age.

Pregnancy Category B. Reproduction studies in rats have shown cleft palates at 25-50 times the human dose. Epidemiological studies in pregnant women, however, do not indicate that meclizine increases the risk of abnormalities when administered during pregnancy. Despite the animal findings, it would appear that the possibility of fetal harm is remote. Nevertheless, meclizine, or any other medication, should be used during pregnancy only if clearly necessary. WARNINGS

The effect of renal impairment on the pharmacokinetics of meclizine has not been evaluated. Due to a potential for drug/metabolite accumulation, meclizine should be administered with caution in patients with renal impairment and in the elderly as renal function generally declines with age.