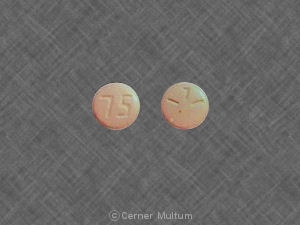 Plavix (clopidogrel bisulfate) 75 mg tablets are available as pink, round, biconvex, film-coated tablets debossed with “75” on one side and “1171” on the other. Tablets are provided as follows:

Plavix (clopidogrel bisulfate) 300 mg tablets are available as pink, oblong, film-coated tablets debossed with “300” on one side and “1332” on the other. Tablets are provided as follows:

In patients with established peripheral arterial disease or with a history of recent myocardial infarction (MI) or recent stroke Plavix is indicated to reduce the rate of MI and stroke.

Plavix is contraindicated in patients with active pathological bleeding such as peptic ulcer or intracranial hemorrhage.

Plavix is contraindicated in patients with hypersensitivity (e.g., anaphylaxis) to clopidogrel or any component of the product.

Thienopyridines, including Plavix, increase the risk of bleeding.

Thienopyridines inhibit platelet aggregation for the lifetime of the platelet (7-10 days). Because the half-life of clopidogrel's active metabolite is short, it may be possible to restore hemostasis by administering exogenous platelets; however, platelet transfusions within 4 hours of the loading dose or 2 hours of the maintenance dose may be less effective.

Discontinuation of Plavix increases the risk of cardiovascular events. If Plavix must be temporarily discontinued (e.g., to treat bleeding or for surgery with a major risk of bleeding), restart it as soon as possible. When possible, interrupt therapy with Plavix for five days prior to such surgery. Resume Plavix as soon as hemostasis is achieved.

TTP, sometimes fatal, has been reported following use of Plavix, sometimes after a short exposure (<2 weeks). TTP is a serious condition that requires urgent treatment including plasmapheresis (plasma exchange). It is characterized by thrombocytopenia, microangiopathic hemolytic anemia (schistocytes [fragmented RBCs] seen on peripheral smear), neurological findings, renal dysfunction, and fever.

Advise patients not to discontinue Plavix without first discussing it with the healthcare provider who prescribed it.

Advise patients that they:

Instruct patients to get prompt medical attention if they experience symptoms of TTP that cannot otherwise be explained.

Advise patients to inform physicians and dentists that they are taking Plavix before any surgery or dental procedure.

There was no evidence of tumorigenicity when clopidogrel was administered for 78 weeks to mice and 104 weeks to rats at dosages up to 77 mg/kg per day, which afforded plasma exposures >25 times that in humans at the recommended daily dose of 75 mg.

Clopidogrel was not genotoxic in four in vitro tests (Ames test, DNA-repair test in rat hepatocytes, gene mutation assay in Chinese hamster fibroblasts, and metaphase chromosome analysis of human lymphocytes) and in one in vivo test (micronucleus test by oral route in mice).

Clopidogrel was found to have no effect on fertility of male and female rats at oral doses up to 400 mg/kg per day (52 times the recommended human dose on a mg/m² basis).

Use In Specific Populations

Reproduction studies performed in rats and rabbits at doses up to 500 and 300 mg/kg/day, respectively (65 and 78 times the recommended daily human dose, respectively, on a mg/m² basis), revealed no evidence of impaired fertility or fetotoxicity due to clopidogrel. There are, however, no adequate and well-controlled studies in pregnant women. Because animal reproduction studies are not always predictive of a human response, Plavix should be used during pregnancy only if clearly needed.

Studies in rats have shown that clopidogrel and/or its metabolites are excreted in the milk. It is not known whether this drug is excreted in human milk. Because many drugs are excreted in human milk and because of the potential for serious adverse reactions in nursing infants from clopidogrel, a decision should be made whether to discontinue nursing or to discontinue the drug, taking into account the importance of the drug to the mother.

Safety and effectiveness in pediatric populations have not been established.

A randomized, placebo-controlled trial (CLARINET) did not demonstrate a clinical benefit of clopidogrel in neonates and infants with cyanotic congenital heart disease palliated with a systemic-to-pulmonary arterial shunt. Possible factors contributing to this outcome were the dose of clopidogrel, the concomitant administration of aspirin and the late initiation of therapy following shunt palliation. It cannot be ruled out that a trial with a different design would demonstrate a clinical benefit in this patient population.

The observed risk of bleeding events with Plavix plus aspirin versus placebo plus aspirin by age category is provided in Table 1 and Table 2 for the CURE and COMMIT trials, respectively. No dosage adjustment is necessary in elderly patients.

Experience is limited in patients with severe and moderate renal impairment.

No dosage adjustment is necessary in patients with hepatic impairment.

Effect Of Other Drugs On Plavix

The effect of proton pump inhibitors (PPI) on the systemic exposure to the clopidogrel active metabolite following multiple doses of Plavix 75 mg evaluated in dedicated drug interaction studies is presented in Figure 1.

Pharmacodynamic and pharmacokinetic parameters measured in these studies showed that the interaction was highest with omeprazole and least with dexlansoprazole.

Effect Of Plavix On Other Drugs

In vitro studies have shown that the glucuronide metabolite of clopidogrel is a strong inhibitor of CYP2C8. Concomitant administration of repaglinide with Plavix increased the systemic exposure to repaglinide (AUC0-∞) by 5.1-fold following the loading dose (300 mg) and by 3.9-fold on day 3 of the maintenance dose (75 mg) of Plavix.

Reproduction studies performed in rats and rabbits at doses up to 500 and 300 mg/kg/day, respectively (65 and 78 times the recommended daily human dose, respectively, on a mg/m² basis), revealed no evidence of impaired fertility or fetotoxicity due to clopidogrel. There are, however, no adequate and well-controlled studies in pregnant women. Because animal reproduction studies are not always predictive of a human response, Plavix should be used during pregnancy only if clearly needed.

The following serious adverse reactions are discussed below and elsewhere in the labeling:

In CURE, Plavix use with aspirin was associated with an increase in major bleeding (primarily gastrointestinal and at puncture sites) compared to placebo with aspirin (see Table 1). The incidence of intracranial hemorrhage (0.1%) and fatal bleeding (0.2%) were the same in both groups. Other bleeding events that were reported more frequently in the clopidogrel group were epistaxis, hematuria, and bruise.

The overall incidence of bleeding is described in Table 1.

In COMMIT, similar rates of major bleeding were observed in the Plavix and placebo groups, both of which also received aspirin (see Table 2).

Other bleeding events that were reported more frequently in the Plavix group were epistaxis and hematoma.

In CURE and CHARISMA, which compared Plavix plus aspirin to aspirin alone, there was no difference in the rate of adverse events (other than bleeding) between Plavix and placebo.

In CAPRIE, which compared Plavix to aspirin, pruritus was more frequently reported in those taking Plavix. No other difference in the rate of adverse events (other than bleeding) was reported.

The following adverse reactions have been identified during postapproval use of Plavix. Because these reactions are reported voluntarily from a population of an unknown size, it is not always possible to reliably estimate their frequency or establish a causal relationship to drug exposure.

Hemorrhages, including those with fatal outcome, have been reported in patients treated with Plavix.

Platelet inhibition by Plavix is irreversible and will last for the life of the platelet. Overdose following clopidogrel administration may result in bleeding complications. A single oral dose of clopidogrel at 1500 or 2000 mg/kg was lethal to mice and to rats and at 3000 mg/kg to baboons. Symptoms of acute toxicity were vomiting, prostration, difficult breathing, and gastrointestinal hemorrhage in animals.

Based on biological plausibility, platelet transfusion may restore clotting ability.

After repeated doses of 75 mg Plavix per day for 10 days in patients with severe hepatic impairment, inhibition of ADP-induced platelet aggregation was similar to that observed in healthy subjects.

In a small study comparing men and women, less inhibition of ADP-induced platelet aggregation was observed in women.

After single and repeated oral doses of 75 mg per day, clopidogrel is rapidly absorbed. Absorption is at least 50%, based on urinary excretion of clopidogrel metabolites.

Plavix can be administered with or without food. In a study in healthy male subjects when Plavix 75 mg per day was given with a standard breakfast, mean inhibition of ADP-induced platelet aggregation was reduced by less than 9%. The active metabolite AUC0-24 was unchanged in the presence of food, while there was a 57% decrease in active metabolite Cmax. Similar results were observed when a Plavix 300 mg loading dose was administered with a high-fat breakfast.

Clopidogrel is extensively metabolized by two main metabolic pathways: one mediated by esterases and leading to hydrolysis into an inactive carboxylic acid derivative (85% of circulating metabolites) and one mediated by multiple cytochrome P450 enzymes. Cytochromes first oxidize clopidogrel to a 2-oxo-clopidogrel intermediate metabolite. Subsequent metabolism of the 2-oxoclopidogrel intermediate metabolite results in formation of the active metabolite, a thiol derivative of clopidogrel. The active metabolite is formed mostly by CYP2C19 with contributions from several other CYP enzymes, including CYP1A2, CYP2B6 and CYP3A. The active thiol metabolite binds rapidly and irreversibly to platelet receptors, thus inhibiting platelet aggregation for the lifespan of the platelet.

The Cmax of the active metabolite is twice as high following a single 300 mg clopidogrel loading dose as it is after four days of 75 mg maintenance dose. Cmax occurs approximately 30 to 60 minutes after dosing. In the 75 to 300 mg dose range, the pharmacokinetics of the active metabolite deviates from dose proportionality: 4-fold the dose results in 2.0-fold and 2.7-fold the Cmax and AUC, respectively.