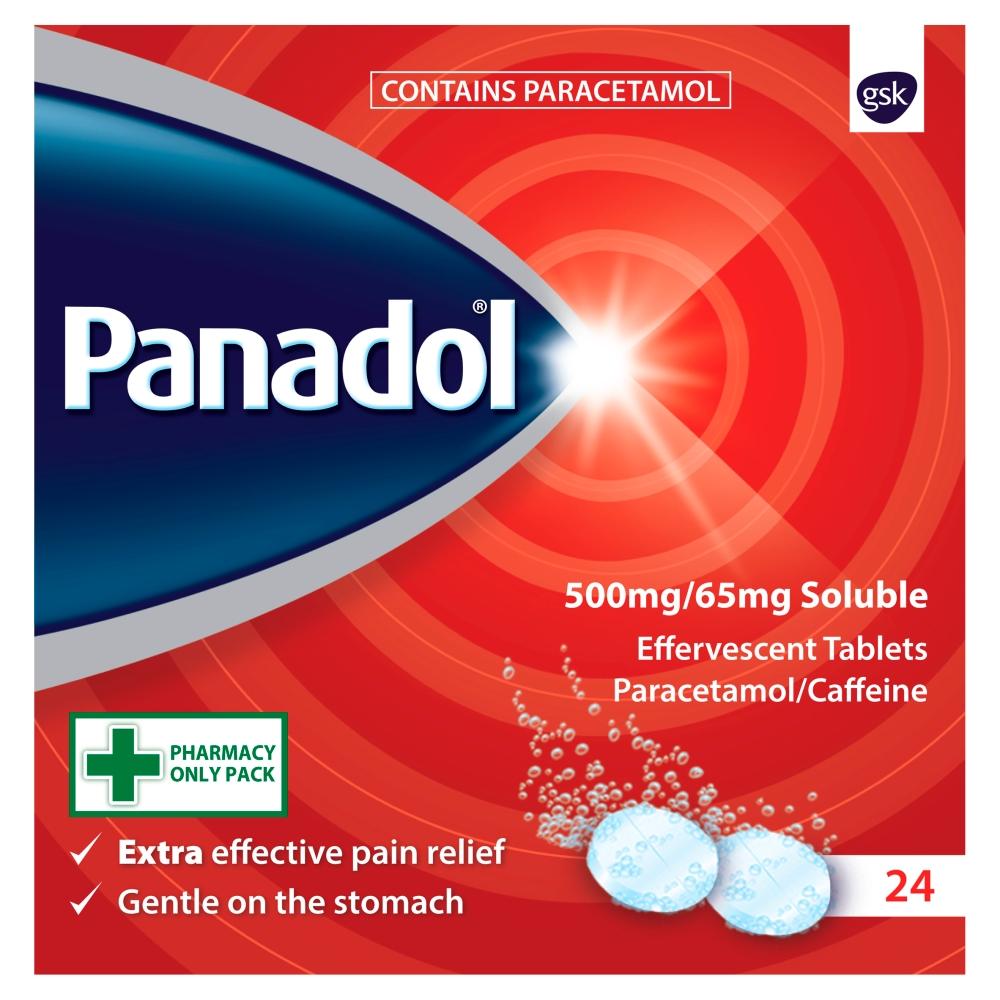 Panadol Extra is a mild analgesic and antipyretic formulated to give extra pain relief. The soluble tablets are recommended for the treatment of most painful and febrile conditions, for example, headache including migraine, backache, toothache, colds and influenza, sore throat, rheumatic pain and dysmenorrhoea.

Panadol Extra should be dissolved in at least half a tumblerful of water.

Adults (including the elderly) and children aged 16 years and over:

One tablet up to four times daily.

Not recommended for children under 12 years.

Do not take more frequently than every 4 hours.

Do not take for longer than three days without consulting your doctor.

Panadol Extra Soluble Tablets are for oral administration only.

Hypersensitivity to paracetamol, caffeine or any of the other constituents.

Care is advised in the administration of paracetamol to patients with renal or hepatic impairment. The hazard of overdose is greater in those with non-cirrhotic alcoholic liver disease.

Excessive intake of caffeine (e.g. coffee, tea and some canned drinks) should be avoided while taking this product.

Do not exceed the stated dose.

Patients should be advised to consult their doctor if their headaches become persistent.

Patients should be advised not to take other paracetamol-containing products concurrently.

Each 2 tablet dose of Panadol Extra Soluble Tablet contains 854 mg of sodium and should not be taken by patients on a low sodium diet.

Patients with rare hereditary problems of fructose intolerance should not take this medicine.

If symptoms persist consult your doctor.

Keep out of the reach and sight of children.

Immediate medical advice should be sought in the event of an overdose, even if you feel well. Do not take with any other paracetamol-containing products.

Immediate medical advice should be sought in the event of an overdose, even if you feel well, because of the risk of delayed, serious liver damage.

Adverse events from historical clinical trial data are both infrequent and from small patient exposure. Accordingly, events reported from extensive post-marketing experience at therapeutic/labelled dose and considered attributable are tabulated below by system class. Due to limited clinical trial data, the frequency of these adverse events is not known (cannot be estimated from available data), but post-marketing experience indicates that adverse reactions to paracetamol are rare and serious reactions are very rare.

* There have been cases of bronchospasm with paracetamol, but these are more likely in asthmatics sensitive to aspirin or other NSAIDs.

Symptoms of paracetamol overdose in the first 24 hours are pallor, nausea, vomiting, anorexia and abdominal pain. Liver damage may become apparent 12 to 48 hours after ingestion. Abnormalities of glucose metabolism and metabolic acidosis may occur. In severe poisoning, hepatic failure may progress to encephalopathy, haemorrhage, hypoglycaemia, cerebral oedema and death. Acute renal failure with acute tubular necrosis, strongly suggested by loin pain, haematuria and proteinuria, may develop even in the absence of severe liver damage. Cardiac arrhythmias and pancreatitis have been reported.

Immediate treatment is essential in the management of paracetamol overdose. Despite a lack of significant early symptoms, patients should be referred to hospital urgently for immediate medical attention. Symptoms may be limited to nausea or vomiting and may not reflect the severity of overdose or the risk of organ damage. Management should be in accordance with established treatment guidelines, see BNF overdose section.

Treatment with activated charcoal should be considered if the overdose has been taken within 1 hour. Plasma paracetamol concentration should be measured at 4 hours or later after ingestion (earlier concentrations are unreliable). Treatment with N-acetylcysteine may be used up to 24 hours after ingestion of paracetamol, however, the maximum protective effect is obtained up to 8 hours post-ingestion. The effectiveness of the antidote declines sharply after this time. If required the patient should be given intravenous N-acetylcysteine, in line with the established dosage schedule. If vomiting is not a problem, oral methionine may be a suitable alternative for remote areas, outside hospital. Management of patients who present with serious hepatic dysfunction beyond 24h from ingestion should be discussed with the NPIS or a liver unit.

It must be noted that for clinically significant symptoms of caffeine overdose to occur with this product, the amount ingested would be associated with serious paracetamol-related toxicity.

Patients should receive general supportive care (e.g. hydration and maintenance of vital signs). The administration of activated charcoal may be beneficial when performed within one hour of the overdose, but can be considered for up to four hours after the overdose. The CNS effects of overdose may be treated with intravenous sedatives.

Treatment of overdose with Cope Sachets requires assessment of plasma paracetamol levels for antidote treatment, with signs and symptoms of codeine and caffeine toxicity being managed symptomatically.

The combination of paracetamol and caffeine is a well established analgesic combination.

Paracetamol is rapidly and almost completely absorbed from the gastro-intestinal tract. It is relatively uniformly distributed throughout most body fluids and exhibits variable protein binding. Excretion is almost exclusively renal, in the form of conjugated metabolites.

Caffeine is absorbed readily after oral administration, maximal plasma concentrations are achieved within one hour and the plasma half-life is about 3.5 hours. 65 - 80% of administered caffeine is excreted in the urine as 1-methyluric acid and 1-methylxanthine.

There are no pre-clinical data of relevance to the prescriber which are additional to that already included in other sections of the SPC.

The product should be stored below 30°C.