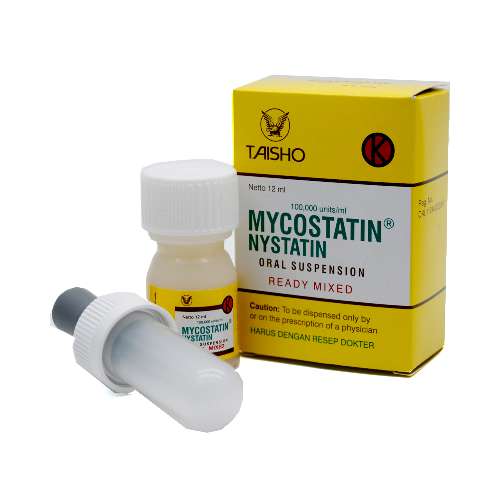 Nystatin topical preparations are indicated in the treatment of cutaneous or mucocutaneous mycotic infections caused by Candida albicans and other susceptible Candida species.

These preparations are not indicated for systemic, oral, intravaginal or ophthalmic use.

Adults and Pediatric Patients (Neonates and Older): Apply liberally to affected areas twice daily or as indicated until healing is complete.

Adults and Pediatric Patients (Neonates and Older): Apply to candidal lesions two or three times daily until healing is complete. For fungal infection of the feet caused by Candida species, the powder should be dusted on the feet, as well as, in all foot wear.

Nystatin topical preparations are contraindicated in patients with a history of hypersensitivity to any of their components.

Nystatin, topical preparations should not be used for the treatment of systemic, oral, intravaginal or ophthalmic infections.

If irritation or sensitization develops, treatment should be discontinued and appropriate measures taken as indicated. It is recommended that KOH smears, cultures, or other diagnostic methods be used to confirm the diagnosis of cutaneous or mucocutaneous candidiasis and to rule out infection caused by other pathogens.

If there is a lack of therapeutic response, KOH smears, cultures, or other diagnostic methods should be repeated.

It is not known whether nystatin is excreted in human milk. Caution should be exercised when nystatin is prescribed for a nursing woman.

Safety and effectiveness have been established in the pediatric population from birth to 16 years. (See DOSAGE AND ADMINISTRATION.)

Clinical studies with MYCOSTATIN (Nystatin) Cream and MYCOSTATIN (Nystatin) Topical Powder did not include sufficient numbers of subjects aged 65 years and older to determine whether they respond differently than younger subjects. Other reported clinical experience has not identified differences in responses between elderly and younger patients, but greater sensitivity of some older individuals cannot be ruled out.

Interaction with other medicinal products and other forms of interaction

The frequency of adverse events reported in patients using Mycostatin (nystatin) ® preparations is less than 0.1%. The more common events that were reported include allergic reactions, burning, itching, rash, eczema, and pain on application. (See PRECAUTIONS: General.)

The frequency of adverse events reported in patients using Mycostatin (nystatin) ® preparations is less than 0.1%. The more common events that were reported include allergic reactions, burning, itching, rash, eczema, and pain on application. (See PRECAUTIONS: General.)

Nystatin is not absorbed from intact skin or mucous membrane.

Mycostatin price
We have no data on the cost of the drug.
However, we will provide data for each active ingredient