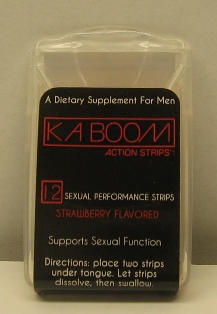 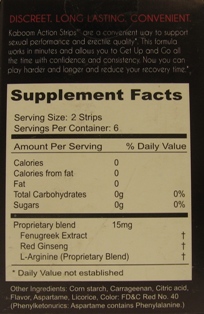 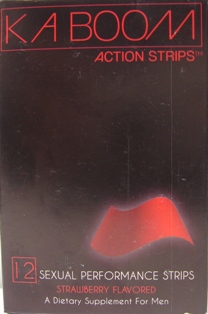 Kaboom Action Strips is indicated in adult men with erectile dysfunction, which is the inability to achieve or maintain a penile erection sufficient for satisfactory sexual performance.

In order for Kaboom Action Strips to be effective, sexual stimulation is required.

It's forbidden by the FDA.

Consistent with its known effects on the nitric oxide/cyclic guanosine monophosphate (cGMP) pathway , sildenafil was shown to potentiate the hypotensive effects of nitrates, and its co-administration with nitric oxide donors (such as amyl nitrite) or nitrates in any form is therefore contraindicated.

The co-administration of PDE5 inhibitors, including sildenafil, with guanylate cyclase stimulators, such as riociguat, is contraindicated as it may potentially lead to symptomatic hypotension.

Agents for the treatment of erectile dysfunction, including sildenafil, should not be used in men for whom sexual activity is inadvisable (e.g. patients with severe cardiovascular disorders such as unstable angina or severe cardiac failure).

Kaboom Action Strips is contraindicated in patients who have loss of vision in one eye because of non-arteritic anterior ischaemic optic neuropathy (NAION), regardless of whether this episode was in connection or not with previous PDE5 inhibitor exposure.

The safety of Kaboom Action Strips (sildenafil) has not been studied in the following sub-groups of patients and its use is therefore contraindicated: severe hepatic impairment, hypotension, recent history of stroke or myocardial infarction and known hereditary degenerative retinal disorders such as retinitis pigmentosa (a minority of these patients have genetic disorders of retinal phosphodiesterases).

A medical history and physical examination should be undertaken to diagnose erectile dysfunction and determine potential underlying causes, before pharmacological treatment is considered.

Prior to initiating any treatment for erectile dysfunction, physicians should consider the cardiovascular status of their patients, since there is a degree of cardiac risk associated with sexual activity. Sildenafil has vasodilator properties, resulting in mild and transient decreases in blood pressure. Prior to prescribing sildenafil, physicians should carefully consider whether their patients with certain underlying conditions could be adversely affected by such vasodilatory effects, especially in combination with sexual activity. Patients with increased susceptibility to vasodilators include those with left ventricular outflow obstruction (e.g., aortic stenosis, hypertrophic obstructive cardiomyopathy), or those with the rare syndrome of multiple system atrophy manifesting as severely impaired autonomic control of blood pressure.

Serious cardiovascular events, including myocardial infarction, unstable angina, sudden cardiac death, ventricular arrhythmia, cerebrovascular haemorrhage, transient ischaemic attack, hypertension and hypotension have been reported post-marketing in temporal association with the use of Kaboom Action Strips. Most, but not all, of these patients had pre-existing cardiovascular risk factors. Many events were reported to occur during or shortly after sexual intercourse and a few were reported to occur shortly after the use of Kaboom Action Strips without sexual activity. It is not possible to determine whether these events are related directly to these factors or to other factors.

Agents for the treatment of erectile dysfunction, including sildenafil, should be used with caution in patients with anatomical deformation of the penis (such as angulation, cavernosal fibrosis or Peyronie's disease), or in patients who have conditions which may predispose them to priapism (such as sickle cell anaemia, multiple myeloma or leukaemia).

Prolonged erections and priapism have been reported with sildenafil in post-marketing experience. In the event of an erection that persists for longer than 4 hours, the patient should seek immediate medical assistance. If priapism is not treated immediately, penile tissue damage and permanent loss of potency could result.

The safety and efficacy of combinations of sildenafil with other PDE5 inhibitors, or other pulmonary arterial hypertension (PAH) treatments containing sildenafil (REVATIO), or other treatments for erectile dysfunction have not been studied. Therefore the use of such combinations is not recommended.

Concomitant use with ritonavir

Co-administration of sildenafil with ritonavir is not advised.

Concomitant use with alpha-blockers

Caution is advised when sildenafil is administered to patients taking an alpha-blocker, as the co-administration may lead to symptomatic hypotension in a few susceptible individuals. This is most likely to occur within 4 hours post sildenafil dosing. In order to minimise the potential for developing postural hypotension, patients should be hemodynamically stable on alpha-blocker therapy prior to initiating sildenafil treatment. Initiation of sildenafil at a dose of 25 mg should be considered. In addition, physicians should advise patients what to do in the event of postural hypotensive symptoms.

Studies with human platelets indicate that sildenafil potentiates the antiaggregatory effect of sodium nitroprusside in vitro. There is no safety information on the administration of sildenafil to patients with bleeding disorders or active peptic ulceration. Therefore sildenafil should be administered to these patients only after careful benefit-risk assessment.

The film coating of the tablet contains lactose. Kaboom Action Strips should not be administered to men with rare hereditary problems of galactose intolerance, Lapp lactase deficiency or glucose-galactose malabsorption.

Kaboom Action Strips is not indicated for use by women.

Kaboom Action Strips has moderate influence on the ability to drive and use machines.

As dizziness and altered vision were reported in clinical trials with sildenafil, patients should be aware of how they might be affected by Kaboom Action Strips, before driving or using machines.