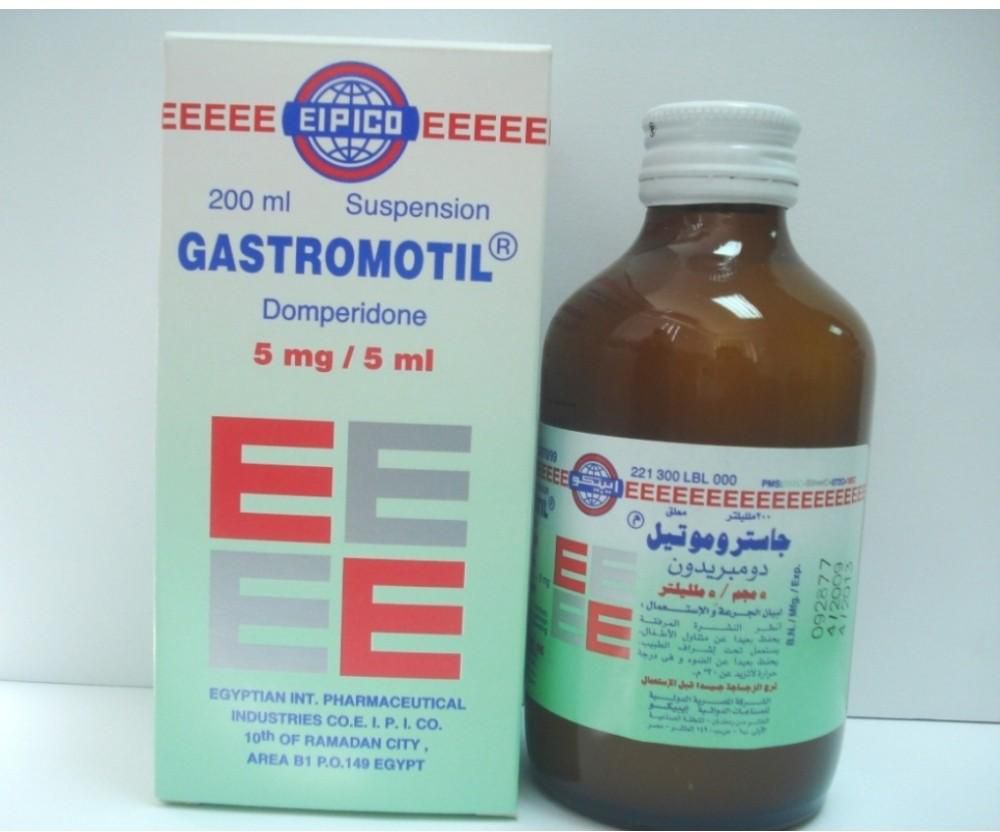 Gastromotil Suspension is indicated in adults and children for the relief of the symptoms of nausea and vomiting.

The information provided in Dosage (Posology) and method of administration of Gastromotil is based on data of another medicine with exactly the same composition as the Gastromotil. . Be careful and be sure to specify the information on the section Dosage (Posology) and method of administration in the instructions to the drug Gastromotil directly from the package or from the pharmacist at the pharmacy.
more...

Gastromotil Oral Suspension should be used at the lowest effective dose for the shortest duration necessary to control nausea and vomiting.

It is recommended to take Gastromotil Oral Suspension before meals. If taken after meals, absorption of the drug is somewhat delayed.

Patients should try to take each dose at the scheduled time. If a scheduled dose is missed, the missed dose should be omitted and the usual dosing schedule resumed. The dose should not be doubled to make up for a missed dose.

Usually, the maximum treatment duration should not exceed one week.

Adults and adolescents (12 years of age and older and weighing 35 kg or more).

10 ml (of 1mg/ml oral suspension) up to three times per day with a maximum dose of 30ml per day.

Neonates, infants and children (under 12 years of age and weighing less than 35kg)

Gastromotil suspension is contraindicated in the following situations:

- When stimulation of the gastric motility could be harmful, e.g. in patients with gastro-intestinal haemorrhage, mechanical obstruction or perforation.

- In patients with moderate or severe hepatic impairment.

- co-administration with QT-prolonging drugs, with the exception of apomorphine

The information provided in Special warnings and precautions for use of Gastromotil is based on data of another medicine with exactly the same composition as the Gastromotil. . Be careful and be sure to specify the information on the section Special warnings and precautions for use in the instructions to the drug Gastromotil directly from the package or from the pharmacist at the pharmacy.
more...

The elimination half-life of Gastromotil is prolonged in severe renal impairment. For repeated administration, the dosing frequency of Gastromotil should be reduced to once or twice daily depending on the severity of the impairment. The dose may also need to be reduced.

Gastromotil has been associated with prolongation of the QT interval on the electrocardiogram. During post-marketing surveillance, there have been very rare cases of QT prolongation and torsades de pointes in patients taking Gastromotil. These reports included patients with confounding risk factors, electrolyte abnormalities and concomitant treatment which may have been contributing factors.

Gastromotil should be used at the lowest effective dose in adults and children.

Treatment with Gastromotil should be stopped if signs or symptoms occur that may be associated with cardiac arrhythmia, and the patients should consult their physician.

Patients should be advised to promptly report any cardiac symptoms.

Use with Potent CYP3A4 Inhibitors:

Co-administration with oral ketoconazole, erythromycin or other potent CYP3A4 inhibitors that prolong the QTc interval should be avoided.

Although no dosage adjustment of levodopa is deemed necessary, an increase of plasma levodopa concentration (max 30-40%) has been observed when Gastromotil was taken concomitantly with levodopa.

Gastromotil suspension contains 400mg of liquid sorbitol (non-crystallising, E420) per ml, which may have a mild laxative effect. Patients with rare hereditary problems of fructose intolerance should not take this medicine.

Gastromotil has no or negligible influence on the ability to drive and use machines.

The safety of Gastromotil was evaluated in clinical trials and in postmarketing experience. The clinical trials included 1275 patients with dyspepsia, gastro-oesophageal reflux disorder (GORD), Irritable Bowel Syndrome (IBS), nausea and vomiting or other related conditions in 31 double-blind, placebo-controlled studies. All patients were at least 15 years old and received at least one dose of Gastromotil (Gastromotil base). The median total daily dose was 30 mg (range 10 to 80 mg), and median duration of exposure was 28 days (range 1 to 28 days). Studies in diabetic gastroparesis or symptoms secondary to chemotherapy or parkinsonism were excluded.

* exacerbation of restless legs syndrome in patients with Parkinson's disease

In 45 studies where Gastromotil was used at higher dosages, for longer duration and for additional indications including diabetic gastroparesis, the frequency of adverse events (apart from dry mouth) was considerably higher. This was particularly evident for pharmacologically predictable events related to increased prolactin. In addition to the reactions listed above, akathisia, breast discharge, breast enlargement, breast swelling, depression, hypersensitivity, lactation disorder, and irregular menstruation were also noted.

Other central nervous system-related effects of convulsion and agitation also are primarily reported in infants and children.

Overdose has been reported primarily in infants and children. Symptoms of overdosage may include agitation, altered consciousness, convulsions, disorientation, somnolence and extrapyramidal reactions.

There is no specific antidote to Gastromotil, but in the event of overdose, standard symptomatic treatment should be given immediately. ECG monitoring should be undertaken, because of the possibility of QT interval prolongation. Close medical supervision and supportive therapy is recommended.

Anticholinergic, anti-parkinson drugs may be helpful in controlling the extrapyramidal reactions.

Gastromotil is a dopamine antagonist with anti-emetic properties, Gastromotil does not readily cross the blood-brain barrier. In Gastromotil users, especially in adults, extrapyramidal side effects are very rare, but Gastromotil promotes the release of prolactin from the pituitary. Its anti-emetic effect may be due to a combination of peripheral (gastrokinetic) effects and antagonism of dopamine receptors in the chemoreceptor trigger zone, which lies outside the blood-brain barrier in the area postrema. Animal studies, together with the low concentrations found in the brain, indicate a predominantly peripheral effect of Gastromotil on dopamine receptors.

Studies in man have shown oral Gastromotil to increase lower oesophaegeal pressure, improve antroduodenal motility and accelerate gastric emptying. There is no effect on gastric secretion.

In accordance with ICHâ€”E14 guidelines, a thorough QT study was performed. This study included a placebo, an active comparator and a positive control and was conducted in healthy subjects with up to 80 mg per day 10 or 20 mg administered 4 times a day of Gastromotil. This study found a maximal difference of QTc between Gastromotil and placebo in LS-means in the change from baseline of 3.4 msec for 20 mg Gastromotil administered 4 times a day on Day 4. The 2-sided 90 % CI (1.0 to 5.9 msec) did not exceed 10 msec. No clinically relevant QTc effects were observed in this study when Gastromotil was administered at up to 80 mg/day (i.e., more than twice the maximum recommended dosing).

However, two previous drug-drug interaction studies showed some evidence of QTc prolongation when Gastromotil was administered as monotherapy (10 mg 4 times a day).The largest time-matched mean difference of QTcF between Gastromotil and placebo was 5.4 msec (95 % CI: -1.7 to 12.4) and 7.5 msec (95 % CI: 0.6 to 14.4), respectively.

Gastromotil is rapidly absorbed after oral administration, with peak plasma concentrations occurring at approximately 1hr after dosing. The Cmax and AUC values of Gastromotil increased proportionately with dose in the 10mg to 20mg dose range. A 2- to 3-fold accumulation of Gastromotil AUC was observed with repeated four times daily (every 5 hr) dosing of Gastromotil for 4 days.

Although Gastromotil's bioavailability is enhanced in normal subjects when taken after a meal, patients with gastro-intestinal complaints should take Gastromotil 15 - 30 minutes before a meal. Reduced gastric acidity impairs the absorption of Gastromotil. Oral bioavailability is decreased by prior concomitant administration of cimetidine and sodium bicarbonate.

Oral Gastromotil does not appear to accumulate or induce its own metabolism; a peak plasma level after 90 minutes of 21 ng/ml after two weeks oral administration of 30 mg per day was almost the same as that of 18 ng/ml after the first dose. Gastromotil is 91-93% bound to plasma proteins. Distribution studies with radiolabelled drug in animals have shown wide tissue distribution, but low brain concentration. Small amounts of drug cross the placenta in rats.

Urinary and faecal excretions amount to 31 and 66% of the oral dose respectively. The proportion of the drug excreted unchanged is small (10% of faecal excretion and approximately 1% of urinary excretion). The plasma half-life after a single oral dose is 7-9 hours in healthy subjects but is prolonged in patients with severe renal insufficiency.

In subjects with severe renal insufficiency (creatinine clearance<30 ml/min/1.73m2) the elimination half-life of Gastromotil was increased from 7.4 to 20.8 hours, but plasma drug levels were lower than in healthy volunteers.

Since very little unchanged drug (approximately 1%) is excreted via the kidneys, it is unlikely that the dose of a single administration needs to be adjusted in patients with renal insufficiency.

However, on repeated administration, the dosing frequency should be reduced to once or twice daily depending on the severity of the impairment, and the dose may need to be reduced.

No pharmacokinetic data are available in the paediatric population.

The information provided in Pharmacotherapeutic group of Gastromotil is based on data of another medicine with exactly the same composition as the Gastromotil. . Be careful and be sure to specify the information on the section Pharmacotherapeutic group in the instructions to the drug Gastromotil directly from the package or from the pharmacist at the pharmacy.
more...
Propulsives
Preclinical safety data

In the presence of inhibition of the metabolism via CYP3A4 free plasma concentrations of Gastromotil can rise up to 3-fold.

At a high, maternally toxic dose (more than 40 times the recommended human dose), teratogenic effects were seen in the rat. No teratogenicity was observed in mice and rabbits.

The information provided in Special precautions for disposal and other handling of Gastromotil is based on data of another medicine with exactly the same composition as the Gastromotil. . Be careful and be sure to specify the information on the section Special precautions for disposal and other handling in the instructions to the drug Gastromotil directly from the package or from the pharmacist at the pharmacy.
more...

How to use the oral syringe

1. Shake the bottle well making sure the cap is firmly on the bottle.

2. Remove the cap. Note: keep the cap nearby to close the bottle after each use.

3. Push the plastic adapter into the neck of the bottle. Note: the adapter must always stay in the bottle.

4. Take the syringe and check the plunger is fully down.

5. Keep the bottle upright and insert the oral syringe firmly into the plastic adapter.

6. Turn the whole bottle with the syringe upside down.

7. Slowly pull the plunger down fully so that the syringe fills with medicine. Push the plunger back up completely to expel any large air bubbles that may be trapped inside the oral syringe.

8. Then pull the plunger slowly back to the volume you need for your dose.

9. Turn the whole bottle with the syringe the right way up and take the syringe out of the bottle.

10. The dose of medicine can now be swallowed directly from the oral syringe. Please ensure that you are sitting upright and the plunger must be pushed slowly to allow you to swallow the dose.

11. Replace the child resistant cap after use, leaving the adapter in place.

12. To clean the oral syringe, take apart by removing the plunger completely. Pull straight out of the barrel. The barrel and plunger can be washed with soap and water, rinsed, and allowed to dry. Do not wash the oral syringe in the dishwasher.

Gastromotil price
We have no data on the cost of the drug.
However, we will provide data for each active ingredient
The approximate cost of Domperidone 10 mg per unit in online pharmacies is from 0.19$ to 0.72$, per package is from 29$ to 120$.