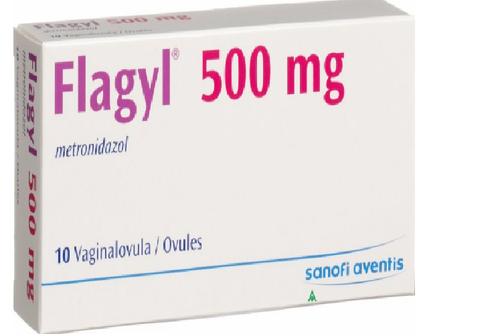 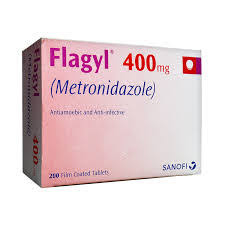 Antialcoholic, Antibiotics And Chemotherapeutics For Dermatological Use, Antiprotozoal, Antiulcer, Bactericidal

1. Treatment of infections in which anaerobic bacteria have been identified or are suspected as pathogens, particularly Bacteroides fragilis and other species of Bacteroides and including other species for which metronidazole is bactericidal, such as Fusobacteria, Eubacteria, Clostridia and anaerobic cocci.

Flagyl has been used successfully in: septicaemia, bacteraemia, brain abscess, necrotising pneumonia, osteomyelitis, puerperal sepsis, pelvic abscess, pelvic cellulitis, peritonitis and post-operative wound infection from which one or more of these anaerobes have been isolated.

2. Prevention of post-operative infections due to anaerobic bacteria, particularly species of Bacteroides and anaerobic Streptococci.

Adults and children over 10 years: 1 gram suppository inserted into the rectum eight hourly for three days. Oral medication with 400 mg three times daily should be substituted as soon as this becomes feasible. If rectal medication must be continued for more than three days, the suppositories should be inserted at 12 hourly intervals.

Children (5 -10 years): As for adults but with 500 mg suppositories and oral medication with 7.5 mg/kg bodyweight three times daily.

In appendectomy and post-operative medication for elective colonic surgery.

Adults and children over 10 years: 1 gram suppository inserted into the rectum two hours before surgery and repeated at eight hourly intervals until oral medication (200 to 400 mg three times daily) can be given to complete a seven day course.

If rectal medication is necessary after the third post-operative day, the frequency of administration should be reduced to 12 hourly.

Known hypersensitivity to nitroimidazoles, metronidazole or any of the excipients.

Metronidazole has no direct activity against aerobic or facultative anaerobic bacteria.

Regular clinical and laboratory monitoring (especially leucocyte count) are advised if administration of Flagyl for more than 10 days is considered to be necessary and patients should be monitored for adverse reactions, such as peripheral or central neuropathy (such as paresthesia, ataxia, dizziness, convulsive seizures).

Metronidazole should be used with caution in patients with active or chronic severe peripheral and central nervous system disease due to the risk of neurological aggravation.

Cases of severe hepatotoxicity/acute hepatic failure, including cases with a fatal outcome with very rapid onset after treatment initiation in patients with Cockayne syndrome have been reported with products containing metronidazole for systemic use. In this population, metronidazole should therefore be used after careful benefit-risk assessment and only if no alternative treatment is available. Liver function tests must be performed just prior to the start of therapy, throughout and after end of treatment until liver function is within normal ranges, or until the baseline values are reached. If the liver function tests become markedly elevated during treatment, the drug should be discontinued.

Patients with Cockayne syndrome should be advised to immediately report any symptoms of potential liver injury to their physician and stop taking metronidazole.

There is a possibility that after Trichomonas vaginalis has been eliminated a gonococcal infection might persist.

In patients undergoing haemodialysis metronidazole and metabolites are efficiently removed during an eight hour period of dialysis. Metronidazole should therefore be re-administered immediately after haemodialysis.

Metronidazole is mainly metabolised by hepatic oxidation. Substantial impairment of metronidazole clearance may occur in the presence of advanced hepatic insufficiency. Significant cumulation may occur in patients with hepatic encephalopathy and the resulting high plasma concentrations of metronidazole may contribute to the symptoms of the encephalopathy. Flagyl should therefore, be administered with caution to patients with hepatic encephalopathy. The daily dosage should be reduced to one third and may be administered once daily.

Patients should be warned that metronidazole may darken urine.

Due to inadequate evidence on the mutagenicity risk in humans , the use of flagyl for longer treatment than usually required should be carefully considered.

Patients should be warned about the potential for drowsiness, dizziness, confusion, hallucinations, convulsions or transient visual disorders, and advised not to drive or operate machinery if these symptoms occur.

The frequency of adverse events listed below is defined using the following convention:

Serious adverse reactions occur rarely with standard recommended regimens. Clinicians who contemplate continuous therapy for the relief of chronic conditions, for periods longer than those recommended, are advised to consider the possible therapeutic benefit against the risk of peripheral neuropathy.

- during intensive and/or prolonged metronidazole therapy, peripheral sensory neuropathy or transient epileptiform seizures have been reported. In most cases neuropathy disappeared after treatment was stopped or when dosage was reduced.

Very rare: vision disorders such as diplopia and myopia, which, in most cases, is transient.

- cases of liver failure requiring liver transplant have been reported in patients treated with metronidazole in combination with other antibiotic drugs.

Very rare: darkening of urine (due to metronidazole metabolite).

Single oral doses of metronidazole, up to 12g have been reported in suicide attempts and accidental overdoses. Symptoms were limited to vomiting, ataxia and slight disorientation. There is no specific antidote for metronidazole overdosage. In cases of suspected massive overdose, symptomatic and supportive treatment should be instituted.

Metronidazole has antiprotozoal and antibacterial actions and is effective against Trichomonas vaginalis and other protozoa including Entamoeba histolytica and Giardia lamblia and against anaerobic bacteria.

Metronidazole is readily absorbed from the rectal mucosa and widely distributed in body tissues. Maximum concentrations occur in the serum after about 1 hour and traces are detected after 24 hours.

At least half the dose is excreted in the urine as metronidazole and its metabolites, including an acid oxidation product, a hydroxy derivative and glucoronide. Metronidazole diffuses across the placenta, and is found in breast milk of nursing mothers in concentrations equivalent to those in serum.

Metronidazole has been shown to be carcinogenic in the mouse and in the rat following chronic oral administration however similar studies in the hamster have given negative results. Epidemiological studies have provided no clear evidence of an increased carcinogenic risk in humans.

Metronidazole has been shown to be mutagenic in bacteria in vitro. In studies conducted in mammalian cells in vitro as well as in rodent or humans in vivo, there was inadequate evidence of a mutagenic effect of metronidazole, with some studies reporting mutagenic effects, while other studies were negative.

Store in the original package in order to protect from light