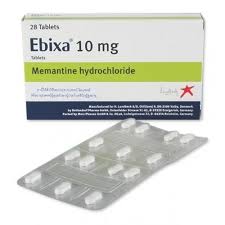 The 10 mg film-coated tablets are pale yellow to yellow, oval shaped film-coated tablet with breaking line and imprint '1 0' on one side and 'M M' on the other side. The tablet can be divided into equal doses.

Treatment of adult patients with moderate to severe Alzheimer's disease.

Treatment should be initiated and supervised by a physician experienced in the diagnosis and treatment of Alzheimer's dementia.

Therapy should only be started if a caregiver is available who will regularly monitor the intake of the medicinal product by the patient. Diagnosis should be made according to current guidelines. The tolerance and dosing of memantine should be reassessed on a regular basis, preferably within three months after start of treatment. Thereafter, the clinical benefit of memantine and the patient's tolerance of treatment should be reassessed on a regular basis according to current clinical guidelines. Maintenance treatment can be continued for as long as a therapeutic benefit is favourable and the patient tolerates treatment with memantine. Discontinuation of memantine should be considered when evidence of a therapeutic effect is no longer present or if the patient does not tolerate treatment.

The recommended starting dose is 5 mg per day which is stepwise increased over the first 4 weeks of treatment reaching the recommended maintenance dose as follows:

The patient should take one 5 mg film-coated tablet per day (white to off-white, oval-oblong) for 7 days.

The patient should take one 10 mg film-coated tablet per day (pale yellow to yellow, oval shaped) for 7 days.

The patient should take one 15 mg film-coated tablet per day (grey-orange, oval-oblong) for 7 days.

The patient should take one 20 mg film-coated tablet per day (grey-red, oval-oblong) for 7 days.

The maximum daily dose is 20 mg per day.

The recommended maintenance dose is 20 mg per day.

On the basis of the clinical studies, the recommended dose for patients over the age of 65 years is 20 mg per day (20 mg once a day) as described above.

No data are available.

Ebixa should be administered orally once a day and should be taken at the same time every day. The film-coated tablets can be taken with or without food.

Caution is recommended in patients with epilepsy, former history of convulsions or patients with predisposing factors for epilepsy.

Concomitant use of N-methyl-D-aspartate (NMDA)-antagonists such as amantadine, ketamine or dextromethorphan should be avoided.).

Some factors that may raise urine pH may necessitate careful monitoring of the patient. These factors include drastic changes in diet, e.g. from a carnivore to a vegetarian diet, or a massive ingestion of alkalising gastric buffers. Also, urine pH may be elevated by states of renal tubulary acidosis (RTA) or severe infections of the urinary tract with Proteus bacteria.

In most clinical trials, patients with recent myocardial infarction, uncompensated congestive heart failure (NYHA III-IV), or uncontrolled hypertension were excluded. As a consequence, only limited data are available and patients with these conditions should be closely supervised.

Due to the pharmacological effects and the mechanism of action of memantine the following interactions may occur:

- The mode of action suggests that the effects of L-dopa, dopaminergic agonists, and anticholinergics may be enhanced by concomitant treatment with NMDA-antagonists such as memantine. The effects of barbiturates and neuroleptics may be reduced. Concomitant administration of memantine with the antispasmodic agents, dantrolene or baclofen, can modify their effects and a dose adjustment may be necessary.

- Concomitant use of memantine and amantadine should be avoided, owing to the risk of pharmacotoxic psychosis.). There is one published case report on a possible risk also for the combination of memantine and phenytoin.

- Other active substances such as cimetidine, ranitidine, procainamide, quinidine, quinine and nicotine that use the same renal cationic transport system as amantadine may also possibly interact with memantine leading to a potential risk of increased plasma levels.

- There may be a possibility of reduced serum level of hydrochlorothiazide (HCT) when memantine is co-administered with HCT or any combination with HCT.

In single-dose pharmacokinetic (PK) studies in young healthy subjects, no relevant active substance-active substance interaction of memantine with glyburide/metformin or donepezil was observed.

In a clinical study in young healthy subjects, no relevant effect of memantine on the pharmacokinetics of galantamine was observed.

Memantine did not inhibit CYP 1A2, 2A6, 2C9, 2D6, 2E1, 3A, flavin containing monooxygenase, epoxide hydrolase or sulphation in vitro.

There are no or limited amount of data from the use of memantine in pregnant women.

Animal studies indicate a potential for reducing intrauterine growth at exposure levels, which are identical or slightly higher than at human exposure. The potential risk for humans is unknown. Memantine should not be used during pregnancy unless clearly necessary.

It is not known whether memantine is excreted in human breast milk but, taking into consideration the lipophilicity of the substance, this probably occurs. Women taking memantine should not breast-feed.

No adverse reactions of memantine were noted on male and female fertility.

Moderate to severe Alzheimer's disease usually causes impairment of driving performance and compromises the ability to use machinery. Furthermore, Ebixa has minor or moderate influence on the ability to drive and use machines such that outpatients should be warned to take special care.

Summary of the safety profile

In clinical trials in mild to severe dementia, involving 1,784 patients treated with Ebixa and 1,595 patients treated with placebo, the overall incidence rate of adverse reactions with Ebixa did not differ from those with placebo; the adverse reactions were usually mild to moderate in severity. The most frequently occurring adverse reactions with a higher incidence in the Ebixa group than in the placebo group were dizziness (6.3% vs 5.6%, respectively), headache (5.2% vs 3.9%), constipation (4.6% vs 2.6%), somnolence (3.4% vs 2.2%) and hypertension (4.1% vs 2.8%).

The following Adverse Reactions listed in the Table below have been accumulated in clinical studies with Ebixa and since its introduction in the market.

1 Hallucinations have mainly been observed in patients with severe Alzheimer's disease.

Alzheimer's disease has been associated with depression, suicidal ideation and suicide. In post-marketing experience these reactions have been reported in patients treated with Ebixa.

Only limited experience with overdose is available from clinical studies and post-marketing experience.

Relative large overdoses (200 mg and 105 mg/day for 3 days, respectively) have been associated with either only symptoms of tiredness, weakness and/or diarrhoea or no symptoms. In the overdose cases below 140 mg or unknown dose the patients revealed symptoms from central nervous system (confusion, drowsiness, somnolence, vertigo, agitation, aggression, hallucination, and gait disturbance) and/or of gastrointestinal origin (vomiting and diarrhoea).

In the most extreme case of overdose, the patient survived the oral intake of a total of 2000 mg memantine with effects on the central nervous system (coma for 10 days, and later diplopia and agitation). The patient received symptomatic treatment and plasmapheresis. The patient recovered without permanent sequelae.

In another case of a large overdose, the patient also survived and recovered. The patient had received 400 mg memantine orally. The patient experienced central nervous system symptoms such as restlessness, psychosis, visual hallucinations, proconvulsiveness, somnolence, stupor, and unconsciousness.

In the event of overdose, treatment should be symptomatic. No specific antidote for intoxication or overdose is available. Standard clinical procedures to remove active substance material, e.g. gastric lavage, carbo medicinalis (interruption of potential entero-hepatic recirculation), acidification of urine, forced diuresis should be used as appropriate.

In case of signs and symptoms of general central nervous system (CNS) overstimulation, careful symptomatic clinical treatment should be considered.

There is increasing evidence that malfunctioning of glutamatergic neurotransmission, in particular at NMDA-receptors, contributes to both expression of symptoms and disease progression in neurodegenerative dementia.

Memantine is a voltage-dependent, moderate-affinity uncompetitive NMDA-receptor antagonist. It modulates the effects of pathologically elevated tonic levels of glutamate that may lead to neuronal dysfunction.

A pivotal monotherapy study of memantine in the treatment of mild to moderate Alzheimer's disease (MMSE total scores at baseline of 10 to 22) included 403 patients. Memantine-treated patients showed a statistically significantly better effect than placebo-treated patients on the primary endpoints: Alzheimer's disease assessment scale (ADAS-cog) (p=0.003) and CIBIC-plus (p=0.004) at week 24 last observation carried forward (LOCF). In another monotherapy study in mild to moderate Alzheimer's disease a total of 470 patients (MMSE total scores at baseline of 11-23) were randomised. In the prospectively defined primary analysis statistical significance was not reached at the primary efficacy endpoint at week 24.

A meta-analysis of patients with moderate to severe Alzheimer's disease (MMSE total scores < 20) from the six phase III, placebo-controlled, 6-month studies (including monotherapy studies and studies with patients on a stable dose of acetylcholinesterase inhibitors) showed that there was a statistically significant effect in favour of memantine treatment for the cognitive, global, and functional domains. When patients were identified with concurrent worsening in all three domains, results showed a statistically significant effect of memantine in preventing worsening, as twice as many placebo-treated patients as memantine-treated patients showed worsening in all three domains (21% vs. 11%, p<0.0001).

Memantine has an absolute bioavailability of approximately 100%. Tmax is between 3 and 8 hours. There is no indication that food influences the absorption of memantine.

Daily doses of 20 mg lead to steady-state plasma concentrations of memantine ranging from 70 to 150 ng/ml (0.5 - 1 Âµmol) with large interindividual variations. When daily doses of 5 to 30 mg were administered, a mean cerebrospinal fluid (CSF)/serum ratio of 0.52 was calculated. The volume of distribution is around 10 l/kg. About 45% of memantine is bound to plasma-proteins.

In man, about 80% of the circulating memantine-related material is present as the parent compound. Main human metabolites are N-3,5-dimethyl-gludantan, the isomeric mixture of 4- and 6-hydroxy-memantine, and 1-nitroso-3,5-dimethyl-adamantane. None of these metabolites exhibit NMDA-antagonistic activity. No cytochrome P 450 catalysed metabolism has been detected in vitro.

In a study using orally administered 14C-memantine, a mean of 84% of the dose was recovered within 20 days, more than 99% being excreted renally.

Memantine is eliminated in a monoexponential manner with a terminal tÂ½ of 60 to 100 hours. In volunteers with normal kidney function, total clearance (Cltot) amounts to 170 ml/min/1.73 mÂ² and part of total renal clearance is achieved by tubular secretion.

Renal handling also involves tubular reabsorption, probably mediated by cation transport proteins. The renal elimination rate of memantine under alkaline urine conditions may be reduced by a factor of 7 to 9. Alkalisation of urine may result from drastic changes in diet, e.g. from a carnivore to a vegetarian diet, or from the massive ingestion of alkalising gastric buffers.

Studies in volunteers have demonstrated linear pharmacokinetics in the dose range of 10 to 40 mg.

At a dose of memantine of 20 mg per day the CSF levels match the ki-value (ki = inhibition constant) of memantine, which is 0.5 Âµmol in human frontal cortex.

In short term studies in rats, memantine like other NMDA-antagonists have induced neuronal vacuolisation and necrosis (Olney lesions) only after doses leading to very high peak serum concentrations. Ataxia and other preclinical signs have preceded the vacuolisation and necrosis. As the effects have neither been observed in long term studies in rodents nor in non-rodents, the clinical relevance of these findings is unknown.

Ocular changes were inconsistently observed in repeat dose toxicity studies in rodents and dogs, but not in monkeys. Specific ophthalmoscopic examinations in clinical studies with memantine did not disclose any ocular changes.

Phospholipidosis in pulmonary macrophages due to accumulation of memantine in lysosomes was observed in rodents. This effect is known from other active substances with cationic amphiphilic properties. There is a possible relationship between this accumulation and the vacuolisation observed in lungs. This effect was only observed at high doses in rodents. The clinical relevance of these findings is unknown.

No genotoxicity has been observed following testing of memantine in standard assays. There was no evidence of any carcinogenicity in life long studies in mice and rats. Memantine was not teratogenic in rats and rabbits, even at maternally toxic doses, and no adverse effects of memantine were noted on fertility. In rats, foetal growth reduction was noted at exposure levels, which are identical or slightly higher than at human exposure.

This medicinal product does not require any special storage conditions.