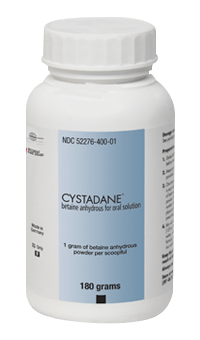 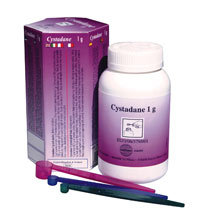 Adjunctive treatment of homocystinuria, involving deficiencies or defects in:

Cystadane should be used as supplement to other therapies such as vitamin B6 (pyridoxine), vitamin B12 (cobalamin), folate and a specific diet.

Cystadane treatment should be supervised by a physician experienced in the treatment of patients with homocystinuria.

The recommended total daily dose is 100 mg/kg/day given in 2 doses daily. However, the dose should be individually titrated according to plasma levels of homocysteine and methionine. In some patients doses above 200 mg/ kg/day were needed to reach therapeutic goals. Caution should be exercised with up-titrating doses for patients with CBS deficiency due to the risk for hypermethioninaemia. Methionine levels should be closely monitored in these patients.

Experience with betaine anhydrous therapy in patients with renal insufficiency or non-alcoholic hepatic steatosis has demonstrated no need to adapt the dose regimen of Cystadane.

The bottle should be lightly shaken before opening. Three measuring spoons are provided which dispense either 100 mg, 150 mg or 1 g of betaine anhydrous. It is recommended that a heaped measuring spoon is removed from the bottle and a flat surface e.g. base of a knife is drawn across the top of the measure. This will give the following doses: small measure 100 mg, middle size measure 150 mg and large measure 1 g of betaine anhydrous.

The powder should be mixed with water, juice, milk, formula or food until completely dissolved and ingested immediately after mixing.

The aim of treatment is to keep plasma levels of total homocysteine below 15 ÂµM or as low as possible. The steady-state response usually occurs within a month.

Hypersensitivity to the active substance.

- If any symptoms of cerebral oedema like morning headaches with vomiting and/or visual changes appear, plasma methionine level and compliance to the diet should be checked and treatment with Cystadane interrupted.

- If symptoms of cerebral oedema recur after re-introduction of treatment then betaine anhydrous therapy should be discontinued indefinitely.

To minimise the risk of potential drug interactions, it is advisable to leave 30 minutes between the intake of betaine anhydrous and amino acids mixtures and/or medicinal products containing vigabatrin and GABA analogues.

No interaction studies have been performed.

Based on in vitro data, betaine anhydrous might interact with amino acids mixtures and medicinal products containing vigabatrin and GABA analogues.

Data on a limited number of exposed pregnancies indicate no adverse event of betaine anhydrous on pregnancy or on the health of the foetus/newborn child. To date, no other relevant epidemiologic data are available. Animal reproduction studies have not been conducted. During pregnancy, administering betaine anhydrous in addition to pyridoxine, folate, anticoagulant and diet under close monitoring of plasma homocysteine would be compatible with good maternal and foetal outcomes. However, Cystadane should not be used during pregnancy unless clearly necessary.

It is not known whether betaine anhydrous is excreted in human milk (although its metabolic precursor, choline, occurs at high levels in human milk). Because of lack of data, caution should be exercised when prescribing Cystadane to breast-feeding women.

No data is available.

Cystadane has no or negligible influence on the ability to drive and use machines.

Summary of the safety profile

In general, adverse reactions seen with betaine anhydrous therapy appeared to be not serious and are mainly related to the gastrointestinal system. Gastrointestinal disorders like diarrhoea, glossitis, nausea, stomach discomfort, vomiting and dental disorders may occur uncommonly.

The most commonly reported adverse reaction during treatment is blood methionine increased. Complete recovery was seen after treatment discontinuation.

Reported adverse reactions are listed below, by system organ class and by frequency.

*Uncommon cases of severe cerebral oedema and hypermethioninemia were reported within 2 weeks to 6 months of starting betaine anhydrous therapy in patients with CBS deficiency, with complete recovery after treatment discontinuation.

High increases in plasma methionine levels in a range from 1,000 to 3,000 ÂµM were noted in these patients. As cerebral oedema has also been reported in patients with hypermethioninemia, secondary hypermethioninemia due to betaine anhydrous therapy has been postulated as a possible mechanism of action.

No case of overdose has been reported.

Betaine anhydrous acts as a methyl group donor in the remethylation of homocysteine to methionine in patients with homocystinuria. As a result, plasma levels of homocysteine should decrease in these patients, to 20-30 % of pre-treatment levels.

Betaine anhydrous supplementation was shown to improve the metabolic abnormalities in the cerebrospinal fluid of patients with homocystinuria.

Elevated homocysteine plasma levels are associated with cardiovascular events (such as thrombosis), osteoporosis, skeletal abnormalities, and optic lens dislocation. In observational studies, clinical improvement (cardiovascular and neurodevelopmental) was reported by the treating physician in about 75% of patients taking betaine anhydrous. Most of these patients were also receiving other treatments such as vitamin B6 (pyridoxine), vitamin B12 (cobalamin) and folate with variable biochemical responses. In most cases, adding betaine anhydrous resulted in a further reduction in plasma homocysteine level. It is likely that due to the multiple nature of therapy (dietary, pharmaceutical, supportive) in these patients, there may be an element of overestimation in the clinical effects of betaine anhydrous treatment. Late detection of homocystinuria in symptomatic state is responsible for residual morbidity due to irreversible damage to connective tissue (ophtalmological, skeletal) that cannot be corrected by further therapy. The available clinical data do not allow correlating posology and clinical efficacy. There is no evidence of development of tolerance.

In a few cases, increased plasma methionine levels were associated with cerebral oedema.

Monitoring plasma homocysteine levels has demonstrated that the onset of action of betaine anhydrous occurred within several days and that a steady-state response was achieved within one month.

In paediatric patients less than 10 years of age, the usual effective dose regimen is 100 mg/kg/day given in 2 doses daily; increasing the frequency above twice daily and/or the dose above 150 mg/kg/day does not improve the homocysteine-lowering effect.

Monitoring betaine plasma concentrations does not help to define the efficacy of treatment, since these concentrations do not directly correspond to the flux through the cytosolic betaine homocysteine methyl transferase pathway.

After a repeated dose regimen of 100 mg/kg/day for 5 days, the absorption kinetics did not change.

After a repeated dose regiment of 100 mg/kg/day for 5 days, the distribution half life was prolonged significantly (up to 36 h), indicating saturable transport and redistribution processes.

At high doses, a CNS depressant effect and irritation of the gastrointestinal tract was seen in rats. Long-term carcinogenicity and reproductive toxicity studies have not been conducted on betaine anhydrous. A standard battery of genotoxicity test reveals no specific hazard for humans.

After the first opening: 3 months.

Keep the bottle tightly closed in order to protect from moisture.

Each pack contains 1 bottle with 180 g of powder and three measuring spoons.