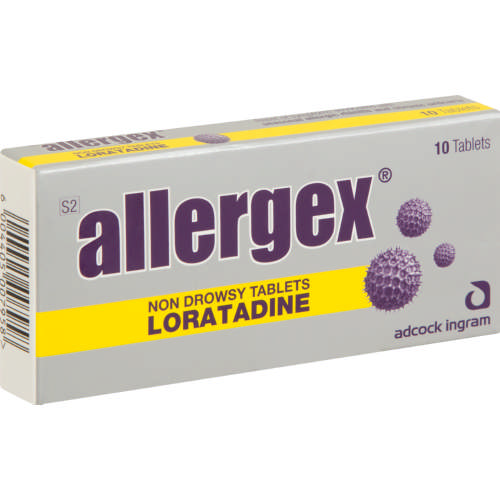 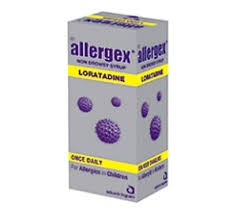 Temporarily relieves these symptoms due to hay fever or other upper respiratory allergies:

Adults and children over 12 years of age

10 mg once daily (one orodispersible tablet once daily).

Children 2 to 12 years of age with body weight more than 30 kg: 10 mg once daily (one orodispersible tablet once daily).

The 10 mg strength orodispersible tablet is not appropriate in children with a body weight less than 30 kg.

Efficacy and safety of Allergex Non Drowsy in children under 2 years of age has not been established.

Patients with severe hepatic impairment should be administered a lower initial dose because they may have reduced clearance of Allergex Non Drowsy. An initial dose of 10 mg every other day is recommended for adults and children weighing more than 30 kg.

No dosage adjustments are required in patients with renal insufficiency.

No dosage adjustments are required in the elderly.

Allergex Non Drowsy 10 mg orodispersible tablets should be handled with caution and with dry hands only.

The tablet shall be put on the tongue and wait until it is thoroughly disintegrated. Water or other liquid is not needed to swallow the dose.

The orodispersible tablet may be taken without regard to mealtime.

Use only with enclosed dosing cup

Allergex Non Drowsy 10 mg orodispersible tablets are contraindicated in patients who are hypersensitive to the active substance or to any of the excipients in these formulations.

Allergex Non Drowsy should be administered with caution in patients with severe hepatic impairment.

This product contains aspartame. Aspartame is a source of phenylalanine, which may be harmful for people with phenylketonuria.

The administration of Allergex Non Drowsy should be discontinued at least 48 hours before skin tests since antihistamines may prevent or reduce otherwise positive reactions to dermal reactivity index.

Do not use if you have ever had an allergic reaction to this product or any of its ingredients.

Ask a doctor before use if you have liver or kidney disease. Your doctor should determine if you need a different dose.

Stop use and ask a doctor if an allergic reaction to this product occurs. Seek medical help right away.

If pregnant or breast-feeding, ask a health professional before use.

Keep out of reach of children. In case of overdose, get medical help or contact a Poison Control Center right away.

In clinical trials that assessed driving ability, no impairment occurred in patients receiving Allergex Non Drowsy. However, patients should be informed that very rarely some people experience drowsiness, which may affect their ability to drive or use machines.

Adverse events which have been associated with Allergex Non Drowsy are given below. Frequencies are defined as:

Not known (cannot be estimated from the available data).

In clinical trials in a paediatric population, children aged 2 through 12 years, common adverse reactions reported in excess of placebo were headache (2.7%), nervousness (2.3%), and fatigue (1%).

In clinical trials involving adults and adolescents in a range of indications including AR and CIU, at the recommended dose of 10 mg daily, adverse reactions with Allergex Non Drowsy were reported in 2 % of patients in excess of those treated with placebo.

Other adverse reactions reported during the post-marketing period are listed in the following table.

Reporting suspected adverse reactions after authorisation of the medicinal product is important. It allows continued monitoring of the benefit/risk balance of the medicinal product. Healthcare professionals are asked to report any suspected adverse reactions via the Yellow Card Scheme: www.mhra.gov.uk/yellowcard or search for MHRA Yellow Card in the Google Play or Apple App Store.

Overdosage with Allergex Non Drowsy increased the occurrence of anticholinergic symptoms. Somnolence, tachycardia, and headache have been reported with overdoses.

In the event of overdose, general symptomatic and supportive measures are to be instituted and maintained for as long as necessary. Administration of activated charcoal as a slurry with water may be attempted. Gastric lavage may be considered. Allergex Non Drowsy is not removed by haemodialysis and it is not known if Allergex Non Drowsy is removed by peritoneal dialysis. Medical monitoring of the patient is to be continued after emergency treatment.

Allergex Non Drowsy, the active ingredient in the medicinal product, is a tricyclic antihistamine with selective, peripheral Hl-receptor activity.

Allergex Non Drowsy has no clinically significant sedative or anticholinergic properties in the majority of the population and when used at the recommended dosage.

During long-term treatment there were no clinically significant changes in vital signs, laboratory test values, physical examinations or electrocardiograms.

Allergex Non Drowsy has no significant H2-receptor activity. It does not inhibit norepinephrine uptake and has practically no influence on cardiovascular function or on intrinsic cardiac pacemaker activity.

In healthy subjects, plasma distribution half-lives of Allergex Non Drowsy and its active metabolite are approximately 1 and 2 hours, respectively.

Increase in plasma concentrations of Allergex Non Drowsy has been reported after concomitant use with ketoconazole, erythromycin, and cimetidine in controlled trials, but without clinically significant changes (including electrocardiographic).

The bioavailability parameters of Allergex Non Drowsy and of the active metabolite are dose proportional.

The pharmacokinetic profile of Allergex Non Drowsy and its metabolites is comparable in healthy adult volunteers and in healthy geriatric volunteers.

In patients with chronic alcoholic liver disease, the AUC and peak plasma levels (Cmax) of Allergex Non Drowsy were double while the pharmacokinetic profile of the active metabolite was not significantly changed from that in patients with normal liver function. The elimination half-lives for Allergex Non Drowsy and its metabolite were 24 hours and 37 hours, respectively, and increased with increasing severity of liver disease.

Allergex Non Drowsy and its active metabolite are excreted in the breast milk of lactating women.

In reproductive toxicity studies, no teratogenic effects were observed. However, prolonged parturition and reduced viability of offspring were observed in rats at plasma levels (AUC) 10 times higher than those achieved with clinical doses.

No evidence of mucous membrane irritation was observed after daily administration of up to 12 tablets (120 mg) of oral lyophilisates into the hamster cheek pouch for five days.

Allergex Non Drowsy price
We have no data on the cost of the drug.
However, we will provide data for each active ingredient
The approximate cost of Loratadine 10 mg per unit in online pharmacies is from 0.24$ to 0.8$, per package is from 20$ to 80$.