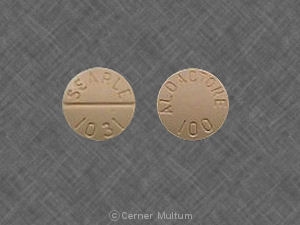 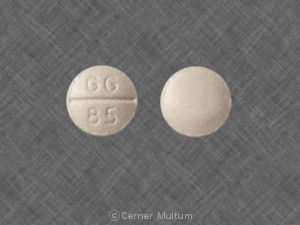 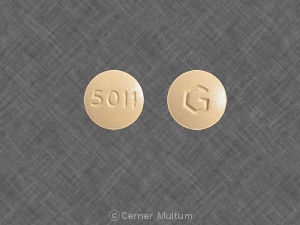 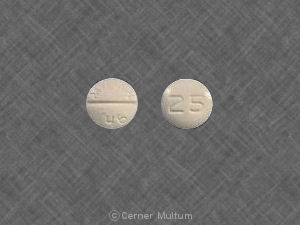 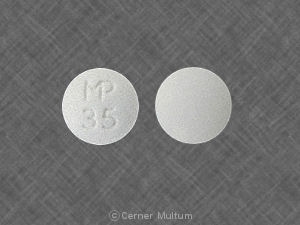 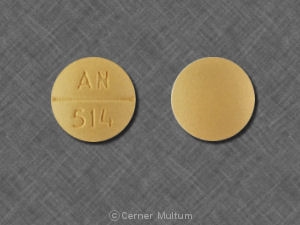 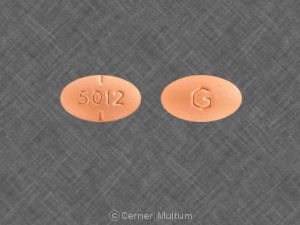 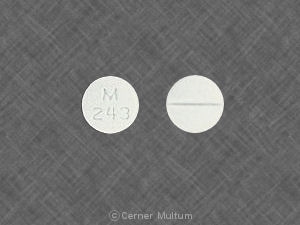 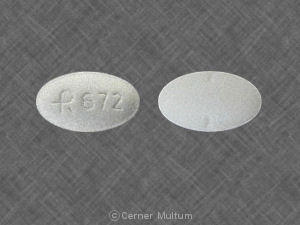 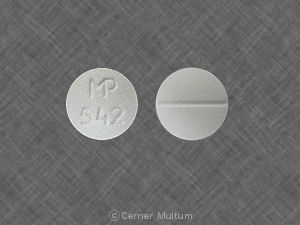 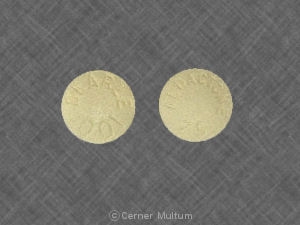 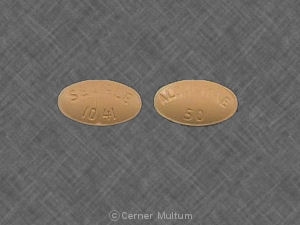 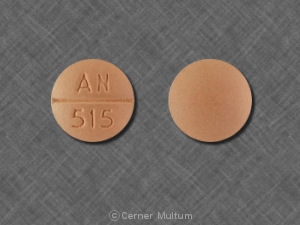 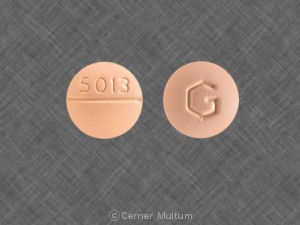 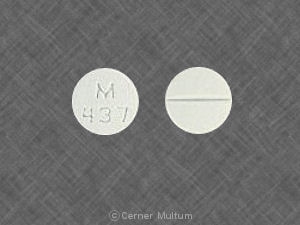 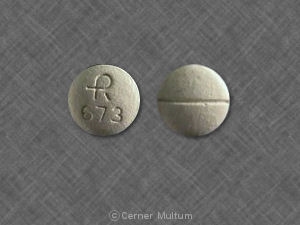 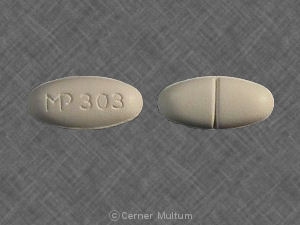 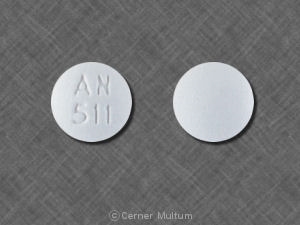 Buff film-coated tablets with â€œSEARLE 134â€ engraved on one side.

- Hepatic cirrhosis with ascites and oedema

- Diagnosis and treatment of primary aldosteronism.

Children should only be treated under guidance of a paediatric specialist. There is limited paediatric data available.

For management of oedema an initial daily dose of 100 mg of spironolactone administered in either single or divided doses is recommended, but may range from 25 mg to 200 mg daily. Maintenance dose should be individually determined.

<), treatment in conjunction with standard therapy should be initiated at a dose of spironolactone 25 mg once daily if serum potassium is â‰¤5.0 mEq/L and serum creatinine is â‰¤2.5 mg/dL.

Hepatic cirrhosis with ascites and oedema

Initial dose usually 100 mg/day to 200 mg/day. In severe cases the dosage may be gradually increased up to 400 mg/day. When oedema is controlled, maintenance dosage should be individually determined.

Usual dose 100 mg/day to 200 mg/day. Spironolactone has not been shown to be anti-inflammatory, or to affect the basic pathological process. Its use is only advised if glucocorticoids by themselves are insufficiently effective.

Diagnosis and treatment of primary aldosteronism

Aldactone may be employed as an initial diagnostic measure to provide presumptive evidence of primary hyperaldosteronism while patients are on normal diets.

Long test: Aldactone is administered at a daily dosage of 400 mg for 3 to 4 weeks. Correction of hypokalaemia and hypertension provides presumptive evidence for the diagnosis of primary hyperaldosteronism.

Short test: Aldactone is administered at a daily dosage of 400 mg for 4 days. If serum potassium increases during Aldactone administration but drops when Aldactone is discontinued, a presumptive diagnosis of primary hyperaldosteronism should be considered.

After the diagnosis of hyperaldosteronism has been established by more definitive testing procedures, Aldactone may be administered at doses of 100 mg to 400 mg daily in preparation for surgery. For patients who are considered unsuitable for surgery, Aldactone may be employed for long-term maintenance therapy at the lowest effective dosage determined for the individual patient.

It is recommended that treatment is started with the lowest dose and titrated upwards as required to achieve maximum benefit. Care should be taken with severe hepatic and renal impairment which may alter drug metabolism and excretion.

Initial daily dosage should provide 1-3 mg of spironolactone per kilogram body weight given in divided doses. Dosage should be adjusted on the basis of response and tolerance.

Children should only be treated under guidance of a paediatric specialist. There is limited paediatric data available.

Administration of Aldactone once daily with a meal is recommended.

Spironolactone is contraindicated in adult and paediatric patients with the following:

- concomitant use of eplerenone or other potassium sparing diuretics.

Spironolactone is contraindicated in paediatric patients with moderate to severe renal impairment.

Aldactone should not be administered concurrently with other potassium conserving diuretics and potassium supplements should not be given routinely with Aldactone as hyperkalaemia may be induced.

Fluid and electrolyte status should be regularly monitored particularly in the elderly, in those with significant renal and hepatic impairment.

Hyperkalaemia may occur in patients with impaired renal function or excessive potassium intake and can cause cardiac irregularities which may be fatal. Should hyperkalaemia develop Aldactone should be discontinued, and if necessary, active measures taken to reduce the serum potassium to normal.

Reversible hyperchloraemic metabolic acidosis, usually in association with hyperkalaemia has been reported to occur in some patients with decompensated hepatic cirrhosis, even in the presence of normal renal function.

Reversible increases in blood urea have been reported in association with Aldactone therapy, particularly in the presence of impaired renal function.

Hyperkalaemia may be fatal. It is critical to monitor and manage serum potassium in patients with severe heart failure receiving spironolactone. Avoid using other potassium-sparing diuretics. Avoid using oral potassium supplements in patients with serum potassium >3.5 mEq/L. The recommended monitoring for potassium and creatinine is 1 week after initiation or increase in dose of spironolactone, monthly for the first 3 months, then quarterly for a year, and then every 6 months. Discontinue or interrupt treatment for serum potassium >5 mEq/L or for serum creatinine >4 mg/dL.

Potassium-sparing diuretics should be used with caution in hypertensive paediatric patients with mild renal insufficiency because of the risk of hyperkalaemia..

Potentiation of the effect of antihypertensive drugs occurs and their dosage may need to be reduced when Aldactone is added to the treatment regime and then adjusted as necessary. Since ACE inhibitors decrease aldosterone production they should not routinely be used with Aldactone, particularly in patients with marked renal impairment.

As carbenoxolone may cause sodium retention and thus decrease the effectiveness of Aldactone concurrent use should be avoided.

Non-steroidal anti-inflammatory drugs such as aspirin, indomethacin and mefenamic acid may attenuate the natriuretic efficacy of diuretics due to inhibition of intrarenal synthesis of prostaglandins and have been shown to attenuate the diuretic effect of spironolactone.

Spironolactone reduces vascular responsiveness to noradrenaline. Caution should be exercised in the management of patients subjected to regional or general anaesthesia while they are being treated with Aldactone.

In fluorimetric assays, spironolactone may interfere with the estimation of compounds with similar fluorescence characteristics.

Spironolactone has been shown to increase the half-life of digoxin.

Spironolactone enhances the metabolism of antipyrine.

Spironolactone can interfere with assays for plasma digoxin concentrations.

Spironolactone or its metabolites may cross the placental barrier. With spironolactone, feminisation has been observed in male rat foetuses. The use of Aldactone in pregnant women requires that the anticipated benefit be weighed against the possible hazards to the mother and foetus.

Metabolites of spironolactone have been detected in breast milk. If use of Aldactone is considered essential, an alternative method of infant feeding should be instituted.

Somnolence and dizziness have been reported to occur in some patients. Caution is advised when driving or operating machinery until the response to initial treatment has been determined.

Gynaecomastia may develop in association with the use of spironolactone. Development appears to be related to both dosage level and duration of therapy and is normally reversible when the drug is discontinued. In rare instances some breast enlargement may persist.

The following adverse events have been reported in association with spironolactone therapy:

Healthcare professionals are asked to report any suspected adverse reactions via the Yellow Card Scheme at www.mhra.gov.uk/yellowcard or search for MHRA Yellow Card in the Google Play or Apple App Store.

Acute overdosage may be manifested by drowsiness, mental confusion, nausea, vomiting, dizziness or diarrhoea. Hyponatraemia, or hyperkalaemia may be induced, but these effects are unlikely to be associated with acute overdosage. Symptoms of hyperkalaemia may manifest as paraesthesia, weakness, flaccid paralysis or muscle spasm and may be difficult to distinguish clinically from hypokalaemia. Electrocardiographic changes are the earliest specific signs of potassium disturbances. No specific antidote has been identified. Improvement may be expected after withdrawal of the drug. General supportive measures including replacement of fluids and electrolytes may be indicated. For hyperkalaemia, reduce potassium intake, administer potassium-excreting diuretics, intravenous glucose with regular insulin or oral ion-exchange resins.

Spironolactone, as a competitive aldosterone antagonist, increases sodium excretion whilst reducing potassium loss at the distal renal tubule. It has a gradual and prolonged action.

RALES was a multinational, double-blind study in 1663 patients with an ejection fraction of â‰¤35%, a history of NYHA Class IV heart failure within 6 months, and Class III-IV heart failure at the time of randomization. All patients were taking a loop diuretic, 97% were taking an ACE inhibitor and 78% were on digoxin (at the time this trial was conducted, b-blockers were not widely used to treat heart failure and only 15% were treated with a b-blocker). Patients with a baseline serum creatinine of >2.5 mg/dL or a recent increase of 25% or with a baseline serum potassium of >5.0 mEq/L were excluded. Patients were randomized 1:1 to spironolactone 25 mg orally once daily or matching placebo. Patients who tolerated 25 mg once daily had their dose increased to 50 mg once daily as clinically indicated. Patients who did not tolerate 25 mg once daily had their dosage reduced to 25 mg every other day. The primary endpoint for RALES was time to all-cause mortality. RALES was terminated early, after a mean follow-up of 24 months, because of significant mortality benefit detected on a planned interim analysis. Spironolactone reduced the risk of death by 30% compared to placebo (p<0.001; 95% confidence interval 18% - 40%). Spironolactone also significantly reduced the risk of cardiac death, primarily sudden death and death from progressive heart failure as well as the risk of hospitalization for cardiac causes. Changes in NYHA class were more favourable with spironolactone. Gynaecomastia or breast pain was reported in 10% of men who were treated with spironolactone, as compared with 1% of men in the placebo group (p<0.001). The incidence of serious hyperkalaemia was low in both groups of patients.

There is a lack of substantive information from clinical studies on spironolactone in children. This is a result of several factors: the few trials that have been performed in the paediatric population, the use of spironolactone in combination with other agents, the small numbers of patients evaluated in each trial and the different indications studied. The dosage recommendations for paediatrics are based upon clinical experience and case studies documented in the scientific literature.

Spironolactone is well absorbed orally and is principally metabolised to active metabolites: sulfur containing metabolites (80%) and partly canrenone (20%). Although the plasma half-life of spironolactone itself is short (1.3 hours) the half-lives of the active metabolites are longer (ranging from 2.8 to 11.2 hours). Elimination of metabolites occurs primarily in the urine and secondarily through biliary excretion in the faeces.

Following the administration of 100 mg of spironolactone daily for 15 days in non-fasted healthy volunteers, time to peak plasma concentration (tmax), peak plasma concentration (Cmax), and elimination half-life (t1/2) for spironolactone is 2.6 hr., 80 ng/ml, and approximately 1.4 hr., respectively. For the 7-alpha-(thiomethyl) spironolactone and canrenone metabolites, tmax was 3.2 hr. and 4.3 hr., Cmax was 391 ng/ml and 181 ng/ml, and t1/2 was 13.8 hr. and 16.5 hr., respectively.

The renal action of a single dose of spironolactone reaches its peak after 7 hours, and activity persists for at least 24 hours.

There are no pharmacokinetic data available in respect of use in paediatric population. The dosage recommendations for paediatrics are based upon clinical experience and case studies documented in the scientific literature.

Spironolactone has been shown to produce tumours in rats when administered at high doses over a long period of time. The significance of these findings with respect to clinical use is not certain. However the long term use of spironolactone in young patients requires careful consideration of the benefits and the potential hazard involved. Spironolactone or its metabolites may cross the placental barrier. With spironolactone, feminisation has been observed in male rat foetuses. The use of Aldactone in pregnant women requires that the anticipated benefit be weighed against the possible hazards to the mother and foetus.

Aldactone(Spironolactone) price
We have no data on the cost of the drug.
However, we will provide data for each active ingredient

The approximate cost of Aldactone(Spironolactone) per unit in online pharmacies is from $ 0.6 to $ 1, per package is from $ 50 to$150.